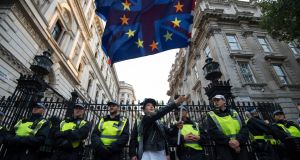 Kayden (11) waves an EU flag and a Union Jack in front of a line of police officers outside Downing Street, London, in protest on Wednesday. Photograph: Kirsty O’Connor/PA Wire

British prime minister Boris Johnson on Wednesday proposed suspending the UK parliament for at least a month to curtail efforts by MPs to prevent a no-deal Brexit on October 31st, as Downing Street also threatened rebels with a general election in early November.

MPs will return on Tuesday next week from their summer break but parliament is to be suspended – or prorogued – for longer than usual during the party conference season, until a Queen’s Speech on October 14th.

The prime minister had earlier confirmed that the House of Commons would return on September 3rd before being prorogued, ending the longest parliamentary session in 400 years. He will use the Queen’s Speech to set out a new legislative agenda.

“We must focus on crucial public priorities – helping the NHS, fighting violent crime, investing in infrastructure and science and cutting the cost of living,” Mr Johnson said.

He added that the government hoped to introduce a withdrawal agreement Bill if a new Brexit deal could be secured at a summit of EU leaders on October 17th-18th.

“I believe it is vital that parliament is sitting both before and after [the] European Council [meeting] and if, as I hope, a deal with the EU is forthcoming, parliament will then have the opportunity to pass the withdrawal agreement Bill required for ratification ahead of October 31st.”

Mr Johnson has repeatedly insisted that the UK must leave the EU on October 31st with or without a Brexit deal. A majority of MPs oppose Britain departing the bloc without an agreement.

Letter to the queen

The leader of the opposition Labour Party Jeremy Corbyn has written to Queen Elizabeth to express grave concern about Mr Johnson’s move to suspend parliament, a party source said on Wednesday. Mr Corbyn also requested a meeting with the queen.

The anti-Brexit Liberal Democrats said they had also written to the queen to express their concerns. Liberal Democrat leader Jo Swinson said on Wednesday afternoon: “It is appalling that the prime minister has forced opposition leaders into taking this action.”

Meanwhile, the first minister of Wales called for the Welsh Assembly to be recalled to discuss the “constitutional crisis which now faces Wales and the United Kingdom”.

On Wednesday, reports also emerged that Scottish Tory leader Ruth Davidson was planning to resign, partially due to differences with Mr Johnson. However, a source said her decision was not related to the proroguing.

Thousands of people protested against the plan in rallies in London, Edinburgh and other cities within hours of Boris Johnson announcing it. At Westminster, crowds blocked traffic. Some staged a sit-down protest in Parliament Square while chanting “stop the coup”, while others headed for Downing Street.

BREAKING: Boris Johnson has written to all Tory MPs laying out his plans to suspend parliament and hold a Queen's Speech on 14 October. pic.twitter.com/tSkxfKvslz

It would be a constitutional outrage if Parliament were prevented from holding the government to account at a time of national crisis. Profoundly undemocratic.

By suspending Parliament to force through a No Deal, Boris Johnson and the Government would remove the voice of the people. It is a dangerous and unacceptable course of action which the @LibDems will strongly oppose. https://t.co/MDxstRXTHM

So it seems that Boris Johnson may actually be about to shut down Parliament to force through a no deal Brexit. Unless MPs come together to stop him next week, today will go down in history as a dark one indeed for UK democracy. https://t.co/68lFnEgiyr

Boris Johnson is aiming for a coup against parliament. Against you the voters and your political representatives. For a disastrous No Deal where the only one to benefit is Trump https://t.co/4sz76f0FbP pic.twitter.com/DWamMw3Nhn

I think Boris is trying to provoke a parliamentary rebellion which he will lose on these grounds. Then have an election. Then return with a majority. Then do a deal or a no-deal -- with a majority he can survive either

Shadow home secretary Diane Abbott told protesters outside parliament: “If this was a Latin American country it would be called a coup, complete with American president publicly backing it. We have to stop this coup, not just for parliament but for this country’s future and for our children’s future.”

Two people carrying a “Brexit Now” banner were grappled as they passed the entrance into parliament, prompting police to intervene.

The prime minister’s decision will increase the chances of opposition MPs calling a no-confidence vote in his government next week in an attempt to install a caretaker administration that would seek to avoid a no-deal Brexit on October 31st.

But Downing Street officials claimed that such a plan would fail because even if the no-confidence vote passed, MPs would struggle to get the numbers needed to form an alternative administration.

“If MPs pass a no-confidence vote next week, then we won’t resign. We won’t recommend another government, we’ll dissolve parliament, call an election between November 1st-5th,” a government insider said.

Responding to the news in Paris, where he was attending a number of engagements including a meeting with British Brexit secretary Steve Barclay, Minister for Foreign Affairs Simon Coveney said: “This is a matter for the British parliament.”

He said it was “hard to tell” if the suspension of parliament would make a no-deal Brexit more likely.

“‘Taking back control’ has never looked so sinister,” he tweeted. “As a fellow parliamentarian, my solidarity with those fighting for their voices to be heard.”

The move to suspend parliament was strongly criticised by the Commons speaker, John Bercow, who described the plan as a “constitutional outrage” and said it was “blindingly obvious that the purpose of prorogation now would be to stop parliament debating Brexit”.

Mr Bercow, who traditionally remains neutral in political matters, said he had had no contact from Downing Street over the decision. “Shutting down parliament would be an offence against the democratic process and the rights of parliamentarians as the people’s elected representatives.”

Dominic Grieve, the former Conservative attorney general who is among MPs seeking to prevent a no-deal Brexit on October 31st, described Mr Johnson’s decision as “deeply questionable” and “pretty outrageous”.

“Normally when we prorogue parliament, it’s for about 5-6 days maximum between sessions so I think this is pretty unprecedented,” he told the BBC.

Mr Grieve described it as “an attempt to govern without parliament” and suggested that Mr Corbyn will bring forward a no-confidence vote in Mr Johnson’s government next week.

“If it is impossible to prevent prorogation, then I think it’s going to be very difficult for people like myself to keep confidence in the government.”

US president Donald Trump tweeted on Wednesday that it would be difficult for Mr Corbyn to bring a no-confidence vote against Mr Johnson, saying: “Boris is exactly what the UK has been looking for.”

Former Tory deputy prime minister Michael Heseltine, in a statement to the PA news agency, said: “I am appalled by the government’s announcement.”

Philip Hammond, the former chancellor, who also opposes a no-deal Brexit, said the move to shut down parliament would be “profoundly undemocratic”. “It would be a constitutional outrage if parliament were prevented from holding the government to account at a time of national crisis,” he said.

Extending the traditional parliamentary break of about three weeks for party conference season to up to five weeks will focus the minds of MPs who wish to take control of the Commons to introduce a Bill to force Mr Johnson’s hand on Brexit.

The pound fell as much as 1 per cent on Wednesday morning, before recovering slightly to trade 0.7 per cent lower against the dollar at just above $1.22 by lunchtime.

The currency has slightly recovered from near-historic lows in the latter half of this month as investors have broadly welcomed opposition plans to frustrate a no-deal Brexit.

An online petition demanding that the moves to suspend parliament are halted reached 750,000 signatures shortly after 8pm on Wednesday, suggesting it was on course for 1 million by the end of the day. As the petition has secured the necessary 100,000 signatures it will be considered for debate by MPs. – Copyright The Financial Times Limited 2019/Reuters/PA