Speaking at the G7 summit US president Donald Trump has said that he wants to see a strong Iran and was not seeking a change of leadership in Tehran, adding that the standard of living for ordinary Iranians was unacceptable. Video: Reuters 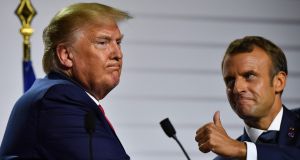 Donald Trump and Iranian president Hassan Rouhani could meet in the near future to try to end the Gulf crisis and replace the current faltering agreement designed to curb Tehran’s nuclear ambitions with a more stringent and durable deal.

The initiative to end the crisis in the Gulf was announced on Monday by Mr Trump and French president Emmanuel Macron at the end of the summit in France of the Group of Seven big democracies.

“My conviction is that an agreement can be reached,” Mr Macron said after speaking to Mr Rouhani by telephone and hearing from him that he would be open to meeting the US president.

Mr Trump said “if the circumstances were correct I would certainly agree” to meet Mr Rouhani, but if the situation deteriorated “they are going to be met with really very violent force”. He said: “We are not looking for leadership change ... We’re looking for no nuclear weapons, no ballistic missiles and a longer period of time [than the current agreement whose curbs start to expire in 2026].”

The US precipitated the latest round of the Iran crisis by withdrawing from the 2015 nuclear deal negotiated under his predecessor Barack Obama and imposing strict US sanctions on the Iran economy.

With the backing of other signatories of the original deal, including the UK and Germany, Mr Macron has been spearheading a drive to “de-escalate” tensions in the Gulf by brokering a new deal between Iran, the US and other world powers.

Mr Macron accelerated his Iran diplomacy in the days leading up to the G7 summit, meeting Iranian foreign minister Mohammad Javad Zarif in Paris on Friday and then inviting him to fly to Biarritz for another meeting on the fringes of the G7 two days later. The French president kept Mr Trump informed each step of the way, according to both men.

“I prefer to talk of a concerted initiative rather than mediation,” Mr Macron said. “Nothing is done. Things are very fragile,” he added, while noting that progress had been made. Analysts say any deal would mean an easing of US sanctions to allow Iran to sell more oil, in return for Iran returning to compliance with strict limits on its nuclear industry to prevent development of nuclear weapons.

The Iran initiative was the culmination of a G7 summit that was always at risk of ending in acrimony because of divisions on many issues – including Brexit, climate change, trade wars and Ukraine – between Mr Trump and the other leaders from France, Japan, Germany, the UK, Italy and Canada. “This is a truly successful G7, there was tremendous unity, there was great unity,” said Mr Trump at his joint news conference with Mr Macron.

In a speech on Iranian television earlier on Monday, Mr Rouhani defended his policy to try all channels to fulfil the will of the Iranian nation, which are protecting its “pride, independence ... national interests coupled with easing pressure or providing welfare for them” and resolve the problems, including diplomatic talks. “We must work with our two hands ... the hand of power and the hand of diplomacy. These two [HANDS]must complement each other,” he said.

The US and France reached a compromise on the thorny issue of France’s new 3 per cent turnover tax on big tech companies, to which Mr Trump has responded with threats to impose new tariffs on French wine because he said it unfairly targeted US businesses such as Facebook and Google.

France says the tax is an interim measure that will be abolished as soon as an international minimum tax is agreed through talks at the OECD. According to Mr Macron, the tax remains necessary to ensure that the companies pay a reasonable level of tax on income generated in big markets such as France instead of diverting profits to tax havens.

Under the compromise worked out by Bruno Le Maire, French finance minister, and US Treasury secretary Steven Mnuchin, the French tax will stay in place for the next two years but companies will receive tax credits for those years if the international tax rate agreed results in a lower level of taxation.

Asked if his wife Melania had drunk French wine despite his threat of retaliatory sanctions, Mr Trump said: “I can confirm that the first lady loved your French wine.”

G7 countries also agreed to provide $20 million in emergency funding to help countries in the Amazon basin, including Brazil, extinguish hundreds of fires that are sweeping through the rainforest, generating smoke in several South American cities and underlining the dangers of global warming. – Copyright The Financial Times Limited 2019