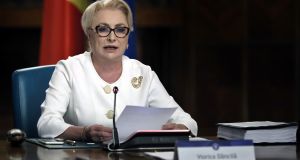 Romania’s controversial government faces the threat of dismissal after its coalition partners divorced, leaving it vulnerable to a no-confidence vote in parliament and pitching the country into a fresh political crisis.

The populist Social Democrats (PSD) vowed to rule alone when their smaller ally, the liberal ALDE party, ended their alliance on Monday following disagreement on policies and a possible joint candidate for November’s presidential election.

The opposition National Liberal Party (PNL) said on Tuesday it would seek support from the required 233 deputies to submit a no-confidence motion to parliament when it reconvened next month, as Romania’s other main parties made clear they would try to oust premier Viorica Dancila’s cabinet in such a vote.

“We will be gathering signatures to back a censure motion as of next week,” PNL leader Ludovic Orban declared. “We will file it once we garner 233 signatures, to be sure there’s a clear majority able to bring Dancila’s government down.”

The PSD held slim hopes of securing support from the 30 deputies and senators of Romania’s ethnic Hungarian party (UDMR), but its leader Kelemen Hunor ruled that out.

“We made a decision in May, when I said before the European parliament elections that we do not support the PSD-ALDE government, and nothing has changed since then,” he said.

“We do not see any arguments at this time to support a government that does not have parliamentary support, the coalition does not exist anymore.”

The PSD has 208 deputies and senators in the 465-seat parliament, 25 short of a majority.

The government has stumbled from one crisis to another since taking power in January 2017, when it launched a drive to soften anti-graft legislation and boost political control over the judiciary, sparking Romania’s biggest protests since its 1989 anti-communist revolution.

The reforms also alarmed the European Union during Romania’s first presidency of the bloc earlier this year, when Brussels feared the government was following Hungary and Poland in adopting a populist, Eurosceptic stance and potentially threatening democratic norms and the rule of law.

The PSD suffered a heavy triple blow in May, when it performed poorly in European elections, lost a simultaneous referendum on its legal reforms, and saw party chief and de facto government leader Liviu Dragnea jailed on graft charges the following day.

Ms Dancila has since tried to distance herself from Mr Dragnea, suspending reforms that he masterminded and reassuring Brussels of her pro-EU outlook.

Romanians’ trust in the authorities was shaken again last month, however, with revelations of how police incompetence badly delayed their response to phone calls for help from a teenage girl who was subsequently raped and murdered.

More than 20,000 Romanians took to the streets to protest over the case and demand improvements to basic services like healthcare, education and transport, which have suffered from decades of graft and underinvestment.

Romanian president Klaus Iohannis – a government critic who is tipped for re-election this year – told the country’s ambassadors on Tuesday that the latest crisis would be resolved and “Romania will remain a democracy and a credible and stable partner in all circumstances.”