Pakistan and India agree to open walkway for pilgrims 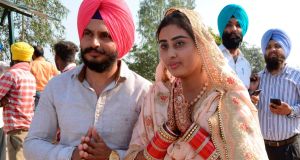 Sikhs offer prayers as they look towards the Gurdwara Kartarpur Sahib in Pakistan after an accord was signed on a visa-free India-Pakistan Kartarpur corridor. Photograph: Narinder Nanu/AFP

India has signed an agreement with Pakistan to allow its pilgrims to travel to one of Sikhism’s holiest shrines in the neighbouring country without visas.

The 4km-long Kartapur corridor or walkway, 480km north of New Delhi, which will be formally inaugurated on November 9th, will provide access to Gurdwara Darbar Sahib Kartapur in Pakistan’s Punjab province, east of Lahore.

Officials said the “holy passageway” will enable worshippers to walk from Dera Baba Nanak village, where Sikhism’s founder Guru Nanak Dev Bedi lived the last 17 years of his life until 1539, to the Sikh temple across the border.

The corridor’s opening will coincide with the 550th anniversary of Nanak’s 550th birth and is viewed as a sign of co-operation between the rival nuclear-armed neighbours, who have fought four wars since independence in 1947 and who continue to harbour mutually antagonistic ties.

India and Pakistan have only one official land crossing, at nearby Wagah; the Kartarpur corridor will become the second one, albeit with limited access.

The Kartarpur corridor is of special significance to Sikhs because of its association with Nanak, who was also revered by Muslims in the 15th and 16th centuries for his simple message of eclecticism and brotherhood.

After Nanak’s death, his Muslim and Hindu followers – who later became Sikhs – disagreed on how to perform his last rites. The Hindus wanted to cremate his mortal remains while the Muslims wanted to bury them.

Eventually a compromise was reached and a Hindu Samadhi or shrine and a Muslim grave were erected at Kartarpur Sahib to appease both communities.

Over centuries, this transformed into a Sikh temple and the current shrine encompassing 42 acres was rebuilt in 1925 after the original one was washed away by floods.

Hundreds of labourers are putting finishing touches to the Sikh temple and surrounding buildings that include a new courtyard, museum, dormitories, an immigration reception centre and an embankment to protect the temple from floods. The project also features a bridge over which visitors can cross the Ravi river which flows between the international border and the shrine, and at times overflows during the annual monsoon rains.

Officials in New Delhi said the corridor will be able to accommodate daily some 5,000 pilgrims. They will not need a passport for their visit but will be required to obtain a permit online before leaving Indian territory.

The proposal for the Kartarpur corridor was first initiated more than two decades ago, but deteriorating security and political and diplomatic ties between the two sides prevented it from coming to fruition.

India has long accused Pakistan of fuelling the Muslim insurgency in its northern disputed Kashmir state that is divided between the two, but claimed in its entirety by both. Pakistan denies this and says it provides the Kashmiri insurgency, which has claimed in excess of 70,000 lives since 1989, only moral and diplomatic support.

India also holds Pakistan responsible for the November 2008 attack by 10 gunmen on two luxury hotels and a Jewish centre in Mumbai lasting over 60 hours, in which 166 people died.

And in February this year, India launched air strikes on an alleged Islamist training camp inside Pakistan, which it blamed for backing a suicide bomb attack in Indian-administered Kashmir in which 40 paramilitary personnel died.

A day later this escalated into an aerial engagement between the rival air forces in which one Indian air force fighter pilot was shot down and captured, but released soon after. Tensions between the neighbours have been escalating ever since.