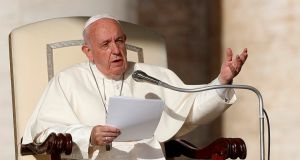 Pope Francis has signalled an openness on the celibacy issue. The move would lift a roughly 1,000-year-old restriction and potentially revolutionise the priesthood. Photograph: Photograph: Remo Casilli/Reuters

A summit of Roman Catholic bishops meeting at the Vatican recommended Saturday that Pope Francis allow the ordination of married men as priests in the Amazon region.

The move would lift a roughly 1,000-year-old restriction and potentially revolutionise the priesthood.

It is the first time a grouping of bishops convened by a pope has endorsed such a historic change to the tradition of a celibate priesthood. The proposal is limited to remote areas of South America where there is a scarcity of priests but could set a precedent for easing the restriction on married priests throughout the world.

If Francis, who has already signalled an openness on the issue, accepts the bishops’ recommendation, he will turn the remote areas of the Amazon region into a laboratory for a Catholic Church looking to the global south for its future, with married priests and indigenous rites mixing with traditional liturgy.

The pope is expected to respond to the proposals by the end of this year. The final document of the summit, noting that many of the faithful in the Amazon region have “enormous difficulties” in receiving communion and seeing a priest, proposed to “ordain priests suitable and esteemed men of the community,” who had already had “fruitful” experiences as deacons and who “receive an adequate formation for the priesthood, having a legitimately constituted and stable family.”

“No priest is ordained without first being a deacon,” Cardinal Michael Czerny said at a news conference Saturday night. He characterised the proposals as a great “pastoral change” for the church.

Liberal supporters said the change would address the unmet needs of a far-flung community and they expressed hope it would lead to similar changes elsewhere.

Conservative opponents called it a threat to the tradition of the priesthood, another troubling sign Francis was willing to dilute the faith to pursue a more inclusive, but less pure church.

The proposal came from the Special Assembly of the Synod of Bishops for the Pan-Amazon Region, a three-week meeting of bishops dedicated to “new paths” in the Amazon that has covered topics as varied as the environment and the possible ordination of women as deacons.

The bishops did not vote to allow women to become deacons in the church, a change that, if accepted by Francis, would have had significant theological repercussions. Instead, Francis said in remarks to the bishops after Saturday evening’s vote that the Vatican would continue to study the role of women in the early years of the church.

“We still haven’t grasped the significance of women in the church,” he said. “Their role must go well beyond questions of function.”