Maureen Dowd: Trump and the media is the greatest love affair of all time 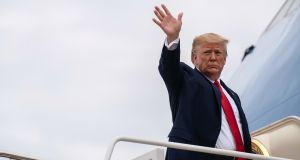 My first job in journalism was as a clerk at The Washington Star. I fielded a lot of calls from readers threatening to cancel their subscriptions – including, on occasion, my mom.

I never got upset about it. Their loss, I figured. I know, because I prowl through at least eight newspapers a day, that I feel about 1,000 per cent smarter and more interesting afterward.

I’ve always noticed a huge difference in leaders who read the news carefully, like Barack Obama, an avid New York Times reader, and those, like Donald Trump, who fail to feed their brains properly. The nasty Narcissus looks at the papers not to broaden himself but for the most narrow of reasons: to hunt for his own name and to search, largely in vain, for any scrap of positive coverage.

Trump cheerleader Tomi Lahren recently tweeted a picture proving that the White House staff is still artificially sweetening what they show the boss. The president sent Lahren a printout of tweets – including hers – praising him for his Dallas rally, compiled by his aides to reinforce Trump’s reality distortion field.

President Snowflake had a pout this past week and cancelled the White House subscriptions to The New York Times and The Washington Post. He probably thinks the papers are still delivered by boys in tweed news caps tossing them over the fence in the general direction of the West Wing.

Get those damn papers off my lawn!

Stephanie Grisham, Trump’s press secretary, imperiously announced that the White House would also strong-arm federal agencies to end their subscriptions to the papers, noting that this would be “a significant cost saving” to taxpayers.

Not as much, of course, as if Trump stopped spending tens of millions on golf outings after savaging his predecessor for excessively hitting the links. Besides, taxpayers would probably be happy to spend the money on newspapers if the president would stop staring at his name and educate himself on the globe.

The enormity of his stupidity caused him to accomplish the impossible: he managed to bollix up America’s Middle East policy even more, after we had already shattered the region through ignorance and arrogance.

In dropping The New York Times and The Post, the president came across like all those liberals on Twitter who bristle with cancelitis. They’re always huffing away from our paper only to sneak back a few days later.

Trump’s move is not without precedent.

JFK was widely mocked when he cancelled deliveries of The New York Herald Tribune and said he would read The St Louis Post-Dispatch instead. After sneaking in copies of The Tribune for a while, president Kennedy resumed openly reading it.

The same will happen with Trump. He can’t quit us. The relationship of Donald and the media is the greatest love affair – and mutual addiction – of all time. When he cancels subscriptions, it’s like an angry lover tearing up pictures of a woman he is obsessed with but cannot win over.

Newspapers are liquid history, with deadlines pressing and people trying to pull the wool over our eyes. God knows, we’re not perfect. But we’re definitely better arbiters of objective reality than Donald Trump, Lindsey Graham, Kevin McCarthy and Steve Scalise.

Given the perverted values we’ve seen in other institutions, such as Facebook, the Catholic Church, the Bush-Cheney White House and the Trump White House, it feels good to be part of an institution that aims to illuminate rather than obscure.

Speaking of spin, I’ve got a push alert for Kellyanne Conway: no matter how many reporters you dress down, your tortured triangle with George and Donald is a real story. No one in Washington has seen anything like it since the days of Martha Mitchell.

So, Mr President, given that you are shorn from The New York Times and The Post, I feel an obligation to fill you in on what you’re missing:

You’re about to be impeached.

Nancy Pelosi is kicking your butt.

The Deep State is not only out to get you; it’s gotten you.

The Republicans on the Hill who tried to crash the hearing – even though their fellow Republicans were taking part – looked like fanatical losers. Matt Gaetz compared his stunt to the Spartans and the movie 300, but he’s no Gerard Butler and his pizza party was lame.

Your long-suffering Republican allies/hostages are finally getting tired of having to defend you all the time.

You’re canny about media. You know that you can’t hurt The New York Times and The Post by having a childish fit of pique; that just sells more newspapers.

The only way you could cut the clicks is if you calmed down, behaved properly and acted like a decent human being, so that there weren’t always 20 breaking news stories every day about your conspiring and grifting and lying and lunacy. And there’s no chance of that, because then all eyes wouldn’t be on you.

You’ll sneak back and you know it. – New York Times