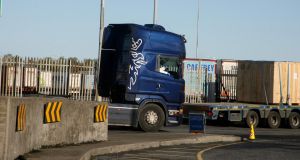 A Garda forensic officer is seen inside a truck cab seized at Dublin Port on Saturday. Police in Essex are keen to interview the Irish driver of this cab as part of their investigation into who transported the trailer in which 39 migrants died to the Belgian Port of Zeebrugge. Photograph: Padraig O’Reilly

UK Police Officers investigating the deaths of 39 people found in a lorry trailer in Essex are expected to visit Ireland in the coming days to question a man arrested at Dublin Port on Saturday.

The suspect in his twenties who is from Northern Ireland, was arrested by Garda immigration officers on Saturday afternoon as he disembarked his truck from a ferry.

Gardaí believe he spent the last three days in France and disposed of his phone before travelling to Dublin.

He is being held by gardaí in relation to separate offences.

Essex Police want to speak to him in relation to the deaths of the 39 people, many of whom are believed to have been trafficked from Vietnam.

Essex Police officers are expected to visit Dublin as early as Sunday in an effort to speak to the man.

They are keen to establish if he is the person who transported the trailer to the Belgium Port of Zeebrugge.

Investigators believe the trailer came by ferry from Zeebrugge to the United Kingdom last Tuesday where it was picked up by another truck and transported to Grays in Essex.

It is understood the truck cab driven by the man arrested at Dublin Port has been taken to a Garda Vehicle Depot in Santry, Dublin where an examination is expected to take place in consultation with UK police.

On Saturday Northern Irish truck driver Maurice Robinson (25) was charged with 39 counts of manslaughter and conspiracy to traffic people over the deaths in Grays.

Three Irish people arrested on Friday in connection with the deaths were released on bail on Sunday. Essex Police said a couple, both 38, from Warrington, arrested in Cheshire on Friday and a man (45) from Northern Ireland arrested at Stansted Airport later the same day had been freed following two days of questioning.

Police officers travelling to Dublin hope the man arrested by gardaí will voluntarily speak with them. It is understood gardaí have consented to allowing Essex Police an opportunity to speak with the man on a voluntary basis.

The UK officers will have no powers of arrest and will be accompanied by a garda during any interview sessions as per normal police co-operation protocol, a source said.

It is not know when they will seek to speak to the man but sources said it could occur as early as Sunday.

The UK would need to seek a European Arrest Warrant (EAW) if it wishes to bring the man back to the UK to face charges.

If Brexit occurs on October 31st, it will no longer be able to seek an EAW and will have to go through a more complex and drawn-out extradition process.

Officers initially believed all the dead, 31 women and eight men, were Chinese nationals, but a representative of VietHome - a website for Vietnamese people in the UK - said it has passed on the pictures of almost 20 people who have been reported missing to police.

Police said they are investigating a “wider conspiracy” after claims surfaced that the lorry could have been part of a convoy of three carrying around 100 people. Efforts to identify the 39 victims are continuing on Sunday.

It is not yet known when the victims entered the trailer, where temperatures can be as low as minus 25 degrees if the fridge is activated, or the route it travelled.

Detective Chief Inspector Martin Pasmore of Essex Police has urged members of the Vietnamese community in Britain and abroad to help identify the 31 men and eight women who died after being smuggled into the UK last week.

The couple and man released on Sunday were questioned on suspicion of manslaughter and conspiracy to traffic people.

The couple, who have one adult child and two younger children, run a haulage business and beauty salon in Warrington.

British said they are investigating a “wider conspiracy” after claims surfaced that the lorry could have been part of a convoy of three carrying around 100 people.

This unit is co-ordinating international investigations alongside the one being carried out by Essex police into the deaths of the 39 Grays deaths.

The anti-trafficking unit involved in the case, the European Migrant Smuggling Centre, is part of the EU’s law-enforcement agency, Europol, and has been at the heart of a global inquiry into the tragedy. A Europol source said investigators at the centre were “working around the clock trying to put together the pieces of the puzzle”.

The unit is regarded as the most sophisticated organisation of its kind in Europe, with an ability to track cross-border crime and a huge database of smuggling networks.