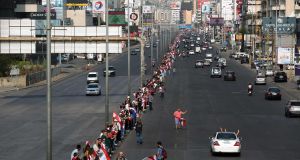 Lebanese protesters hold hands to form a human chain along the coast as a symbol of unity during ongoing anti-government demonstrations, along the Zalka highway. Photograph: Patrick Baz/AFP via Getty Images

Protesters formed a human chain across Lebanon on Sunday, the 11th day of unprecedented rallies against politicians accused of corruption and steering the country towards an economic collapse unseen since the 1975-90 civil war. Protesters joined hands along Lebanon’s coastal roads in an attempt to span 171km from south to north.

The country has been paralysed by roadblocks set up by protesters drawn from across Lebanon’s sectarian spectrum. Lebanon’s banking association said banks would remain closed on Monday, the first day of the working week. Schools and many businesses have shut their doors amid the unrest and banks have already been shut for eight working days.

The nationwide protests are targeting a political class accused of abusing power to exploit state resources for their own benefit. Financial strains are also surfacing in the country, including a scarcity of dollars and pressure on the pegged Lebanese pound.

The government announced an emergency reform package this week, but this failed to defuse anger or to unlock funds from donor states which had pledged $11 billion (about €10 billion) of financing to Lebanon last year, conditional on it enacting badly needed reforms. At the Vatican, Pope Francis offered his prayers on Sunday for young people protesting in Lebanon and asked for the international community’s support to keep the country a place of “peaceful coexistence”. – Reuters