Coronavirus: Americans flock to beaches as some states seek to reopen 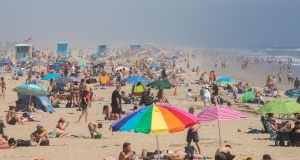 Many Americans flocked to beaches on Saturday as one Florida county expanded access and California experienced a heatwave, even as new coronavirus cases hit a record high in the United States.

Hair salons and other shops in Georgia, Oklahoma and some other states opened for a second day as pockets of the country sought to restart their economies following a month of government-ordered lockdowns.

The tentative steps toward restarting life run against the warnings of many public health experts, who say the increased human interaction could spark a new wave of coronavirus cases.

The US on Friday reported 36,491 new cases, a record daily high, according to a Reuters tally. Global deaths linked to the virus, also known as Covid-19, passed 200,000 on Saturday, with more than a quarter of them in the US, the tally shows.

New York governor Andrew Cuomo repeated his warning on Saturday that reopening businesses too soon was risky, while Rhode Island governor Gina Raimondo pushed back against a protest at the State House in Providence as short-sighted, arguing it could force her to delay her restart date.

“At this point to violate social distancing rules, it’s just selfish,” Ms Raimondo told a briefing, referring to the protest against a lockdown in effect until at least May 8th. “If everybody today went out and violated the rules I will definitely have to push back the date at which we can reopen the economy.”

Volusia County, home to the famed Daytona Beach, opened lots at its coastal parks on Saturday to disabled visitors, one step in a phased reopening that has so far limited its beaches to those seeking to walk, surf, cycle or swim.

In a briefing on Friday, county manager George Recktenwald portrayed the relaxed parking provision as an incremental step and warned against gathering in groups, although residents said many beachgoers were not following the rules.

“I know they have rules and restrictions, but people aren’t listening,” said John Overchuck (45), a lawyer who lives in a beachfront home with his wife and toddler daughter just south of Daytona Beach. “I walked on the beach 10 minutes ago and it’s packed. That wasn’t supposed to happen.”

A heat wave brought thousands of Californians to the open beaches in Newport Beach and Huntington Beach on Saturday despite stay-at-home orders for people across the state, after similarly large crowds visited the beaches on Friday. California governor Gavin Newsom has pleaded for those who visit the shore to practice social distancing.

The focus on testing comes as the crisis appears to be subsiding in New York, the epicentre of the pandemic in the US, with hospitalisations falling to their lowest level in three weeks.

“Twenty one days of hell, and now we are back to where we were 21 days ago,” Mr Cuomo told a daily briefing. “Testing is what we are compulsively or obsessively focused on now.”

Yet New York also reported an additional 437 coronavirus-linked deaths, up from 422 a day earlier and the first rise in four days. New Jersey, its neighbour to the south, reported 249 more deaths. Together the two states account for about half of the nearly 53,000 fatalities in the US.

The top US infectious disease expert Anthony Fauci agreed that testing was key to getting back to normal by identifying carriers, isolating them and tracing their contacts with others.

“Right now we’re doing 1.5 million to 2 million (tests) per week. We probably should get up to twice that as we get into the next several weeks, and I think we will,” Mr Fauci, head of the National Institute of Allergy and Infectious Diseases, said in a webcast of the National Academy of Sciences’ annual meeting.

New Jersey governor Phil Murphy said that while his curve of cases was “undeniably flattening” he would not yet open parks or beaches and suggested he would move cautiously with broad parameters of the state’s reopening plan to be disclosed as soon as Monday.

“We need to see more progress and more slowing before we can begin implementing any effort to get ourselves on the road to the new normal that awaits our state on the other side of this pandemic,” Mr Murphy told a daily briefing.

US president Donald Trump did not hold his regular briefing after causing an uproar two days earlier by suggesting scientists explore whether the internal use of disinfectants such as bleach could treat coronavirus. He later said he was being sarcastic.

“What is the purpose of having White House News Conferences when the Lamestream Media asks nothing but hostile questions, & then refuses to report the truth or facts accurately,” Mr Trump wrote on Twitter on Saturday.

In contrast, barbers, nail salons and other sectors of Georgia’s economy were open for a second day, although many business owners took precautions to limit customers and many decided not to open at all.

Theo Walker, owner of Golden Anchor Tattoo in Atlanta, said he opened his doors for a second day after putting the question of whether to reopen to his artists and they voted yes.

“In an ideal world we would have loved to just wait at home until it’s all over, but unfortunately we all have bills that are waiting, and I did not want my artists to suffer anymore,” he said. “We all decided it was time to get back to work.” - Reuters