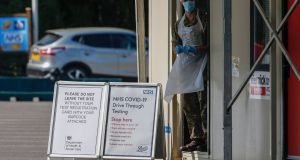 The death toll from coronavirus in hospitals across the UK has risen above 20,000 after a further 813 fatalities were recorded on Saturday.

British home secretary Priti Patel told the daily Downing Street briefing that through the monitoring and testing programme, as of 9am on Saturday 640,792 tests have been carried out in the UK.

She said that 20,319 people in hospital have now died, adding: “As the deaths caused by this terrible virus pass another tragic and terrible milestone, the entire nation is grieving.”

That figure does not include deaths in the wider community, such as in care homes, which means the true toll will be higher by several thousand at least.

The UK became the fifth country to record more than 20, 000 deaths, following the US, Italy, Spain and France.

The grim milestone came as the coronavirus lockdown continued into its fifth weekend and the government faced calls for greater transparency over the scientific advice given to ministers on the outbreak.

Last month, chief scientific adviser Patrick Vallance told MPs the hope was to keep the death toll to under 20,000 – an ambition that was later echoed by NHS England medical director Prof Stephen Powis, who said the UK would have “done very well in this epidemic” if deaths remained below that figure.

Mr Vallance appeared before the Commons Health Select Committee on March 17th, when the UK death toll stood at 71.

Asked whether it was hoped that deaths could potentially get below 20,000, he said: “That is the hope, that we can get it down to that. To put that into perspective, every year in seasonal flu the number of deaths is thought to be 8,000.

“If we can get numbers down to 20,000 and below, that’s a good outcome in terms of where we would hope to get to with this outbreak.”

Dr Paul Hunter, professor of medicine at the University of East Anglia, said the true death toll could already be double the official figure.

“The World Health Organisation said yesterday that about half of all deaths in Europe are occurring in residence of elderly care homes,” he said.

“We know for a fact the figures reported every day are an underestimate, possibly a significant underestimate of the total number of deaths.”

The UK is well on track to hit 30,000 deaths in hospital, perhaps even 40,000 before the pandemic is brought under control, he said.

“We are undoubtedly going to have one of the highest death rates in Europe,” Dr Hunter added.

Opposition parties, however, said political advisers had no business attending the Scientific Advisory Group for Emergencies (Sage) and called for its deliberations to be opened to wider scrutiny.

The controversy over Sage – which will advise ministers on the lifting of restrictions – came after the Guardian reported that Mr Cummings and Ben Warner, a data scientist who worked with him on the Vote Leave campaign in the Brexit referendum, had been present at Sage meetings.

Downing Street denied they were members of the group and said they were simply seeking to better understand the science involved and how it could inform Government decision-making.

Meanwhile, coronavirus tests for key workers through the Government’s new booking website ran out in England for a second day in a row.

More than 10 million key workers and their households are now eligible for Covid-19 tests as officials race to hit their 100,000-a-day testing target by next Thursday.

However, home testing kits were listed as “unavailable” on the Government’s booking website just 15 minutes after it reopened on Saturday morning, according to the BBC.

A spokesman for the department of health said more would be made available from Sunday morning at 8am.

Amid more warm weather on Saturday, queues built up outside some DIY stores as shoppers flocked to stock up on hardware and gardening goods. But beaches and major roads remained largely quiet. – PA