Sérgio Moro’s exit weakens president, with protests breaking out within seconds of his announcement 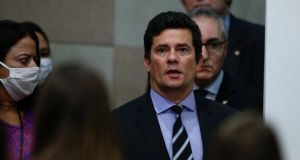 Brazil’s justice minister Sérgio Moro arrives to give a press conference in Brasília to announce his resignation on Friday. Photograph: Eraldo Peres/AP

One of the most popular and powerful figures in Jair Bolsonaro’s far-right administration – the celebrity justice minister Sérgio Moro – has resigned, setting up a potentially momentous political conflict just as Brazil struggles to contain the coronavirus pandemic.

Mr Moro – a hero for much of the Brazilian right and a hate figure for many on the left – announced his decision on Friday after clashing with the president over Mr Bolsonaro’s sacking of the head of Brazil’s federal police.

“I have to protect my biography and above all the commitment I took on … that we would stand firm against corruption, organised crime and violent crime,” said Mr Moro, a 47-year-old judge who became a household name for leading the “Car Wash” corruption investigation and jailing former president Luiz Inácio Lula da Silva ahead of the 2018 presidential election.

With Mr Lula sidelined, Mr Bolsonaro won a landslide victory by pledging to combat corruption and appointed Mr Moro just days later as a potent symbol of his supposed intentions.

Within seconds of Mr Moro’s announcement there were signs support for Mr Bolsonaro was slipping with deafening pot-banging protests erupting in major Brazilian cities, including in strongly pro-Bolsonaro areas of Rio de Janeiro.

“Fora Bolsonaro! Fora Bolsonaro!” (“Bolsonaro out!”), dissenters cried from their windows and balconies as they pounded their saucepans.

The immediate trigger for Mr Moro’s resignation was reportedly Mr Bolsonaro’s decision to remove one of the minister’s closest associates, Maurício Valeixo, from his job as head of the federal police.

Since reports of Mr Valeixo’s impending firing emerged on Thursday, Brazilian newspapers have filled with speculation about why Mr Bolsonaro would be so keen to remove him.

A report in one major newspaper, the Correio Braziliense, claimed Mr Bolsonaro’s discomfort stemmed from the fact that a federal police investigation into the dissemination of fake news and promotion of anti-democracy protests was closing in on a highly sensitive target: the president’s own son, Carlos Bolsonaro.

Carlos Bolsonaro denied those claims in a pair of offensive tweets aimed at the broadsheet. “You scum never stop lying,” one said.

In his explosive 40-minute resignation speech, Mr Moro claimed he was leaving government because of what he called Mr Bolsonaro’s unacceptable and inappropriate political interference in Brazil’s federal police.

Mr Moro claimed Mr Bolsonaro had told him he wanted a federal police director he knew and could call up in order to have access to police intelligence reports.

But Brian Winter, the editor-in-chief of Americas Quarterly, who knows Moro and had questioned his decision to enter politics, claimed other factors had also played a role – including Mr Bolsonaro’s anti-scientific handling of the coronavirus pandemic.

“He has been deeply frustrated by a number of things including the government’s response to Covid-19,” Winter said, claiming Mr Moro had been part of a group of ministers “constantly lobbying Bolsonaro to take the pandemic more seriously and adopt a science-based response”.

Winter said Mr Moro, who last year resisted calls to resign after leaked documents prompted claims he had improperly plotted to jail Mr Lula, also sensed political pressure on Bolsonaro was growing and that the coming months would represent “an existential threat for the presidency itself”.

Mr Moro, who rejected the allegations against him as “sensationalist” smears, is the second top minister to leave Mr Bolsonaro’s administration in just over a week.

Mr Bolsonaro continues to play down the crisis and undermine social distancing measures despite Covid-19 now having claimed more than 3,300 lives. On Thursday a record 407 deaths were reported.

Speaking before Mr Moro’s resignation, the author and commentator Pedro Doria said he feared there would be a high human price to pay for the political chaos consuming Brazil.

“Every single person in government should be totally focused on Covid-19,” Doria said. “The only real result of all this is that a lot of people will die.” – Guardian