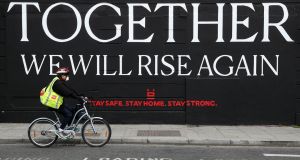 As of Thursday evening, 57% of cases were females and 43% male, with an average age of 49. Photograph: Brian Lawless/PA

A further 52 people have died from Covid-19 in Ireland, according to figures published on Saturday, and 377 additional cases of the disease have been confirmed.

The Department of Health said in 42 cases people were confirmed to have died from the disease by a laboratory test, with 10 others classified as having a probable link to the coronavirus.

Under new reporting guidelines all deaths with a “probable” link to the illness are being added to the State total, which increased to 1,063 on Saturday. Three earlier deaths were removed from the total following the validation of data relating to fatalities, the department said.

There has been 18,561 confirmed cases of Covid-19 in the State to date, with the number growing by 2.1 per cent on Saturday.

Minister for Health Simon Harris has said the week of May 5th, when the latest set of restrictions are due to be reviewed, will not be a “big bang moment” in terms of lifting measures introduced to limit the spread of the virus.

“I’m being honest and blunt with people. I think the week beginning May 5th, is not going to be a big-bang moment in terms of the lifting of restrictions,” he said told reporters on Saturday in Dublin.

“But what I hope it is, is a period of time in which we can explain to people how we would go about reopening our country, how we would phase that, the issues we would consider and hopefully, but far from guaranteed, the easing of one or two restrictions.”

The HSE on Saturday confirmed that21 people had died of coronavirus at St Mary’s Hospital in Dublin’s Phoenix Park. Mr Harris and the HSE extended sympathies to the relatives of the deceased and staff working at the hospital during what the Minister described as a “traumatic time”.

The department said that as of Thursday evening, 57 per cent of Irish Covid-19 cases were in females and 43 per cent in males, with an average age of 49. The highest concentration of cases is in found in Dublin, where 50 per cent of the total has been recorded, followed by Cork (6 per cent).

A total of 4,847 cases have been associated with healthcare workers.

Fourteen per cent (2,536) of people confirmed as having the disease have been hospitalised, with 344 admitted to intensive care. There were 118 people in critical-care beds with confirmed Covid-19 on Thursday, down from 140 last week. A total of 80 suspected or confirmed cases were on ventilators.

HSE figures show the hospital with most confirmed cases of Covid-19 is the Mater in Dublin, where 103 patients with the disease were on site at 8pm on Friday, followed by Beaumont (83), Tallaght (74), St James’s (72) and Connolly (57).

The data show 1,664 vacant general-care beds in the system, alongside 143 critical-care beds.

Stormont’s Department of Health on Saturday said 16 more people had died of the disease, bringing its total reported Covid 19 deaths to 294, predominantly in hospitals. Figures including fatalities at care homes and other facilities will be made available next Friday.

Prof Sam McConkey, an infectious disease specialist, on Saturday said it would be “premature to stop social distancing” at this stage, despite the disease now having a reduced reproductive rate. He said it would take several weeks for Covid-19 to “fizzle out”.

“I think it is premature to stop social distancing at this stage,” he told RTÉ Radio. He said people still have to maintain a 2m distance “or it will come back”.

Prof McConkey said there are places badly hit, such as residential institutions and nursing homes. These would have a rate different to the general population.

Officials warned against complacency in adhering to social distancing measures ahead of the weekend, with Department of Health chief medical officer Dr Tony Holohan saying “we still have a lot of progress to make in terms of the pattern of this disease”.

“We can’t, at the last minute take, as it were, our foot off the gas because we will lose a lot of the progress we have made.”

Dr Holohan said that were the decision to be taken at the moment, “we would be sticking with the restrictions that are in place as they are”.

However, Government officials are considering extending the 2km travel limit on households to 5km or possibly 10km as part of a potential future easing of restrictions. The State may also change its advice to over-70s who are “cocooning” at home so they can go outside for walks and possibly shop in supermarkets during specific hours.

1 Hotels, retail, gyms, churches to open next Tuesday, followed by restaurants and gastropubs on Friday
2 Forget Black Friday, welcome to Green Friday - 30 Irish retailers with great deals
3 Exiting Level 5: What will reopen, when will it happen and when will we know?
4 Child (4) stranded on Luas platform when separated from mother, court hears
5 Businesses can show ‘Dunkirk spirit’ by taking new direct ferry to France
Real news has value SUBSCRIBE