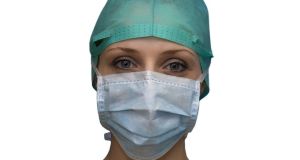 In the United States over 911,000 people have contracted Covid-19 and nearly 52,000 have died. File photograph: The Irish Times

The international death toll from coronavirus, also known as Covid-19, passed 200,000 on Saturday, with more than 2.8 million people infected, as the World Health Organisation warned against issuing “immunity passports” because there is no evidence people who recover from the disease are protected against a second infection.

Here are the latest updates on the global pandemic.

Authorities say the daily figure is a 1.5 per cent increase from Friday.

There were 378 reported deaths in the last 24 hours, taking the death toll since the start of the pandemic in Spain to nearly 23,000.

From Sunday, Spanish children under 14 can go outside with a parent for a maximum of one hour and within 1km from their home.

They have been indoors since March 14th. Parks and schools remain closed.

The UK passed the milestone of 20,000 Covid-19 deaths, counting people who tested positive for coronavirus and died in hospital. The death toll reached 20,319 on Saturday, after 813 new hospital deaths were recorded in the UK. The Department of Health and Social Care said “as of 5pm on April 24th, of those hospitalised in the UK who tested positive for coronavirus, 20,319 have sadly died”.

The government’s chief scientific adviser, Patrick Vallance, said on March 17th that keeping the toll under 20,000 would be “a good outcome in terms of where we would hope to get”. Britain has the fifth-highest official coronavirus death toll in the world, after the US, Italy, Spain and France.

Deaths from the Covid-19 epidemic climbed by 415 on Saturday, the smallest daily tally since March 17th, according to the the Civil Protection Agency.

Saturday’s death toll was slightly down from 420 on Friday.

The total of fatalities since the outbreak came to light on February 21st now stands at 26,384, said the agency, the second highest in the world after that of the United States.

The number of confirmed cases was 195,351, the third highest global tally behind those of the United States and Spain.

People registered as carrying the illness fell to 105,847 from 106,527 on Friday, a sixth consecutive daily decline.

There were 2,102 people in intensive care on Saturday against 2,173 on Friday, maintaining a long-running decline. Of those originally infected, 63,120 were declared recovered against 60,498 a day earlier.

The agency said 1.187 million people had been tested for the virus against 1.148 million the day before, out of a population of about 60 million.

On a lighter note Italians celebrated the 75th anniversary of their country’s liberation from occupation forces in the second World War by emerging on balconies or rooftops to sing a folk song linked to resistance fighters.

Citizens played recordings of Bella Ciao or sang a cappella to mark Liberation Day, which is a national holiday.

The traditional marches and other memorial gatherings are banned during the Covid-19 pandemic.

The death toll in France from the virus has risen by 369 to stand at 22,614, the health ministry said on Saturday.

Encouraged by lower infection figures, the government allowed smaller stores to reopen on Monday, along with car and bicycle dealers and bookstores, but social distancing rules remain in place until May 3rd.

The country’s confirmed cases increased by 2,055 to 152,438 and the death toll rose by 179 to 5,500, data from the Robert Koch Institute for infectious diseases showed on Saturday – a second day of deceleration in both cases and deaths.

More than 911,000 people have contracted Covid-19 and nearly 52,000 people have died, the tally shows. Georgia, Oklahoma and some other states took tentative steps to reopen their economies on Friday, despite disapproval from US president Donald Trump and warnings from health experts that such moves could rekindle the virus and cause more deaths.

The number of fatalities increased to 6,917. The country has the world’s highest per-capita death rate. According to officials, the reason for the grisly figures is not overwhelmed hospitals – 43 per cent of intensive-care beds were vacant even at the peak of the crisis – but the country’s bureaucratic rigour. Unlike many other countries, the home of the EU’s top institutions counts deaths at nursing homes even if there was not a confirmed infection.

Pope Francis has singled out funeral home workers for people’s prayers during the Covid-19 pandemic.

He made the appeal during morning Mass on Saturday in the Vatican City hotel where he resides, saying: “What they do is so heavy and sad. They really feel the pain of this pandemic so close.”

In past remarks, the pope has cited others for doing what he called heroic work during the pandemic, including doctors, nurses, supermarket clerks and transport workers.

The Vatican has its own lockdown, barring the public from its museums and religious ceremonies. It has reported nine coronavirus cases among the residents or employees of the walled, independent Vatican City State.

The government is extending the ban on all events with more than 500 participants until September 1st.

Culture minister Abid Raja said the decision was not easy for the government to make, but stressed “we cannot have big events [in Norway] that can contribute to more infections that will affect life and health”.

For the 10th straight day, China reported no new deaths from coronavirus.

Twelve new cases were reported on Saturday, 11 of them brought from overseas and one local transmission in the northeastern province of Heilongjiang, which borders Russia, according to the National Health Commission.

Just 838 people remain in hospital with Covid-19, while another 1,000 people are undergoing isolation and monitoring for being either suspected cases or having tested positive for the virus while showing no symptoms.

China, widely believed to be the source of the global pandemic, has reported a total of 4,632 deaths among 82,816 cases.

The government in Tehran has registered 76 more deaths in the previous 24 hours. That puts the reported death toll from Covid-19 at 5,650 and confirmed cases at over 89,000.

Iran is the country hardest hit by the virus in the Middle East. About 3,100 patients are understood to be in a critical condition.

The country has eased the stringent lockdown for 1.3 billion people by allowing local and standalone shops to reopen with restrictions such as 50 per cent of workers with face masks and social distancing.

But the home ministry said shops in single and multibrand malls would not be allowed to open anywhere in the country. The relaxation will also not apply in hundreds of hot spots and containment zones across the country.

South Korea has reported 10 fresh cases of Covid-19, the eighth day in a row that the daily increase has been less than 20, as its outbreak slows amid tightened border controls and waning infections in the worst-hit city of Daegu.

The country also reported no new deaths for the second straight day on Saturday. The figures from South Korea’s Centres for Disease Control and Prevention took national totals to 10,718 cases and 240 deaths.

While a slowing caseload has allowed the country to relax its social distancing guidelines over the past week, South Korean prime minister Chung Sye-kyun raised concern over possible transmissions by “quiet spreaders” and instructed officials to conduct antibody tests in Daegu and nearby towns to learn how widespread the coronavirus is.

Sri Lanka has reimposed a countrywide 24-hour curfew after a surge in the number of confirmed coronavirus cases, most of them navy sailors who were hunting those evading quarantine.

The 46 new infections on Friday were the highest in a day. They took the number of Covid-19 patients on the Indian Ocean island to 420, including seven deaths.

Sri Lanka partially lifted a month-long curfew on Monday during daytime hours in more than two-thirds of the country. The new curfew remains in effect until Monday. Police have made more than 30,000 arrests for violations. – Guardian/AP/Reuters/Bloomberg