‘I want my life back’: Germans rail against Covid-19 lockdown

Dozens of protesters were arrested in Berlin on Saturday for flouting coronavirus lockdown measures, which they argue infringe on their constitutional rights. Video: Reuters 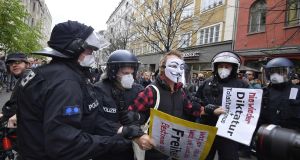 Police remove a demonstrator during a protest against coronavirus restrictions in Berlin. Photograph: Getty

German police wearing riot gear and face masks tussled on Saturday with dozens of protesters demonstrating in central Berlin against the coronavirus lockdown on public life.

Protesters shouted “I want my life back” and held up signs with slogans such as “Protect constitutional rights”, “Freedom isn’t everything but without freedom, everything is nothing”, and “Daddy, what is a kiss?”

Police said they had arrested more than 100 people.

Some protesters tried to keep a distance from each other, sitting on the ground and wearing masks but others clustered together.

Like dozens of countries globally, Germany has put in place strict curbs on public activity to slow transmission of Covid-19 – imposing its lockdown on March 17th.

The protesters handed out newspapers entitled Democratic Resistance that stated coronavirus is an attempt to seize power by spreading fear. The papers quoted 127 doctors worldwide who question the need for strict lockdowns.

Police spokesman Thilo Cablitz said permission had been granted for a newspaper distribution campaign, but the health authorities had not granted permission for a public demonstration.

“During coronavirus times and according to containment regulations, we are obliged to prevent a gathering,” said Mr Cablitz. He added that 180 police officers were on duty.

Germany’s Constitutional Court ruled earlier this month that people have the right to hold protests if they adhere to social distancing rules. The ruling came after pro-democracy activists argued that the lockdown breaches freedom of assembly.

On Saturday, some protesters sat peacefully on the ground at a distance from each other, holding white roses in reference to the White Rose resistance movement against the Nazis.

Why has Germany a low fatality rate?

“We are here today . . . to stand up for our opinion. For the protection of constitutional rights, freedom and above all freedom of speech,” said a woman holding a rose who gave her name only as Sandra.

Germany has the fifth-highest Covid-19 case total behind the United States, Spain, Italy and France. However it has kept fatalities relatively low after early and extensive testing.

Encouraged by lower infection figures, the government allowed smaller stores to reopen on Monday, along with car and bicycle dealers and bookstores, but social distancing rules remain in place until May 3rd.

The country’s confirmed cases increased by 2,055 to 152,438 and the death toll rose by 179 to 5,500, data from the Robert Koch Institute for infectious diseases showed on Saturday – a second day of deceleration in both cases and deaths. – Reuters