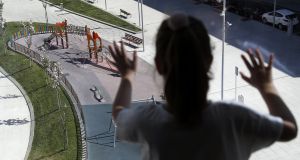 The Spanish government announced that starting from April 26th children under under 14 will be able to leave their confinement accompanied by an adult for an hour a day. Photograph: EPA

Spanish children will at last be able go outside after six weeks confined indoors under one of Europe’s most draconian lockdowns.

Spain’s health ministry said 378 more people had died after being diagnosed with Coronavirus, up slightly on Friday’s 367, the lowest in the past month but well down on the high of 950 of April 2nd.

Spain sees enough evidence of the virus being under control to start easing its lockdown. Children were trying out their masks in anticipation of their first taste of fresh air since prime minister Pedro Sanchez declared a state of emergency on March 14th.

The government said under 14s will from Sunday be allowed up to one hour of supervised outdoor activity per day between 9am and 9pm, staying within 1km of their home.

Adults can accompany up to three children who will not be allowed to use playgrounds and must adhere to social distancing guidelines, remaining at least two metres from other people. The government has not yet said when confinement measures will be eased for older children.

Top police officials urged parents not to abuse the system and to ensure their children stick to the rules. On April 13th sectors including construction and manufacturing were allowed to reopen, but with most people still confined to their homes except for essential reasons, shops, bars and public spaces remain closed.

As bars and restaurants eye a gradual reopening one company is devising safety measures to encourage wary clients to return.

Leganes-based LlenaTuBar, whose name translates as fill up your bar, is fitting dining tables with clear plastic screens to protect customers and installing thermal cameras to detect any patrons with a fever.

“It’s a critical situation for the hospitality sector and if we’re locked down much longer, people will struggle to reopen their businesses,” said owner Manuel Gil.

As the economic fallout from the virus continues to build, Mr Sanchez reiterated calls for a pan-European response.

“The depth of the economic downturn and the risk that its effects will persist after the health emergency requires that a foundation be laid for a . . . just recovery,” wrote Mr Sanchez in newspaper Expansion on Saturday.

The health ministry on Friday changed the methodology for logging cases of the virus. It will no longer count antibody tests and will only include positive results from polymerise chain reaction tests which are used to detect the presence of an antigen, not the presence of the body’s immune response or antibodies.

What is Catalonia doing?

Defending his measures, which ignore health ministry guidelines and highlight a rumbling discontent in some regions with the national response, Mr Torra said: “We have the right to have our own deconfinement plan”.

In Pineda de Mar, northeast Spain, volunteer seamstresses were hard at work making face masks for children ahead of the deconfinement measure.

“More than 100 people are making protective equipment,” said the town’s mayor, Xavier Amor. “We started with masks and then we followed the demand of hospitals, health centres, and nursing homes.” – Reuters