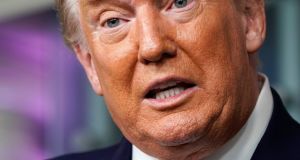 Joe Biden, the Democratic presidential candidate, painted Donald Trump as a tax dodger after the revelation that the president paid no federal income taxes for many of the last 20 years and only $750 (€643) in his first year in the White House.

Hours after the New York Times reported that Trump had often avoided paying taxes by offsetting his business losses against his tax liabilities, Biden launched an advert comparing the president’s payments to those made by ordinary Americans.

The New York Times said Trump had paid $750 in 2016 when he was running for the presidency and the same again during his first year in office in 2017, while paying nothing at all in 11 out of the 18 years that it reviewed.

Nancy Pelosi, the Democratic speaker of the House of Representatives, said the revelations provided “a window into the extraordinary measures that president Trump has used to game the tax code and avoid paying his fair share of taxes, while hard working Americans are”.

Republicans were mostly silent about the revelations, which came as Trump and Biden prepared to participate in the first presidential debate on Tuesday.

During a debate in the 2016 campaign, Hillary Clinton claimed Trump did not want to publish his tax returns because he had not paid federal tax. “That makes me smart,” he responded.

Mr Trump pledged during that campaign to release his returns, following a tradition that has existed since the presidency of Richard Nixon, but he later backtracked, claiming he could not publish them because he was being audited by the Internal Revenue Service.

Trump on Monday responded to the New York Times report by claiming it was “fake news” and based on “illegally obtained information”. He said he had paid “millions of dollars in taxes” and was entitled to depreciation and tax credits “like everyone else”.

Biden, who has released more than 20 years of his tax returns, earlier this year said the public “deserve to know what this president is hiding”.

The president’s finances have been the subject of intense interest ever since he launched his presidential campaign in 2015. While he has invoked the audit to defend his decision not to publish his filings, his own IRS commission last year said there was no rule that prevented the president from releasing returns that were still under audit.

His wealth and overseas business dealings have also been the subject of questions about possible conflicts of interest and the potential that foreign powers could seek to influence him.

As details of his taxes have trickled out in media reports and testimony from former aides, additional questions have emerged about whether he has improperly avoided taxes and manipulated the stated value of his assets to obtain loans or reduce tax liabilities.

The New York Times reported in 2018 that much of his wealth was given to him by his father in transfers that involved “dubious tax schemes” to avoid inheritance taxes.

Democratic lawmakers in Congress have sought copies of his tax records since retaking control of the House after the 2018 midterm election, but have so far been unsuccessful.

Steven Mnuchin, the treasury secretary, refused to hand over the president’s tax information to the House Ways and Means committee, which has authority to review individual tax returns, sparking a lawsuit.

Trump also sued to stop his lenders, Deutsche Bank and Capital One, and his accountant, Mazars USA, giving several other House committees his returns in response to congressional subpoenas.

Cyrus Vance, the Manhattan district attorney, has also sought Trump’s tax returns as part of an ongoing criminal investigation. Trump has fought in court to prevent Vance obtaining the information.

Earlier this year, the supreme court issued a mixed ruling on the president’s efforts to block the congressional subpoenas and Vance’s efforts. Though the court rejected the president’s claims of immunity from investigation, it sent the litigation back to lower courts, effectively delaying any final resolution until after the November 3rd election. – Copyright The Financial Times Limited 2020