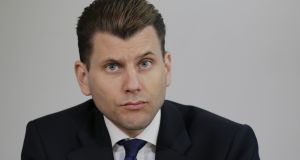 Christian Lüth: “The worse it is for Germany, the better it is for the AfD.” Photograph: Popow/ullstein bild

Germany’s far-right Alternative für Deutschland (AfD) has fired its head spokesman after he suggested “shooting or gassing” migrants living in the country.

Christian Lüth, on leave since April after describing himself as a “fascist”, was let go on Monday, hours ahead of a new television documentary.

Last February, Mr Lüth met a leading far-right YouTuber in a Berlin bar who, unknown to the AfD man, was wearing a microphone. Listening in, and recording the conversation, was German private television station Pro7.

The subject of the conversation was the political atmosphere in which the AfD would thrive best.

“The worse it is for Germany, the better it is for the AfD,” Mr Lüth can be heard saying. “Of course that’s shit, also for our children . . . but probably that’s what’ll save us.”

He said the party’s main strategy was to consider “how bad things can get in Germany”, and plan accordingly with provocative remarks.

In a similar vein, Mr Lüth added that it was in the AfD’s interest for more migrants to come to Germany, spreading greater uncertainty among the wider population.

“Yes because then the AfD will do better,” he said. “Afterwards we can always shoot them [the migrants] all. That’s not an issue. Or gas them, or whatever you want.”

Mr Lüth said his views were representative of senior figures in the party, from whom he took phone calls during the recorded conversation: deputy leader Beatrix von Storch and Alexander Gauland, co-leader of the AfD in the Bundestag parliamentary party.

On Monday, Mr Gauland, who worked closely with Mr Lüth since 2015, said his remarks were “completely unacceptable and in no way with the goals of AfD politics or the AfD parliamentary party”.

Mr Gauland said it was “completely absurd and made-up” to suggest he had ever discussed these issues with his former spokesman, or reached an agreed position with him.

The AfD was founded in 2013 as an opponent of bailouts for countries worst-hit by the euro crisis. Two years later, as its political fortunes faded along with that crisis, it shifted further right as a loud opponent of growing migration. It is now the largest opposition party in the Bundestag and is represented in all of Germany’s 16 state parliaments.

In 2015, Mr Gauland said that his party’s second wind was “of course primarily thanks to the refugee crisis”.