US president Donald Trump paid tribute to Supreme Court Justice Ruth Bader Ginsburg who died at the age of 87. 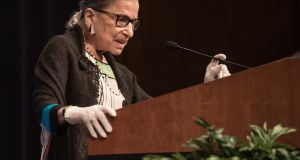 US supreme court judge Ruth Bader Ginsburg who was suffering from pancreatic cancer died at her home in Washington on Friday. She was 87. Photograph: NIcholas Kamm/AFP via Getty Images

The concept of an October surprise is a familiar one in US presidential elections. The emergence of an event in the final campaign weeks that can impact the outcome of the early November election has long been a feature. This year, that surprise has come early.

The passing of supreme court judge Ruth Bader Ginsburg has upended the political landscape, just over six weeks before election day. The 87-year-old, who had become an unlikely icon for the left in recent years, had become the standard bearer for the court’s liberal wing. Her passing injects a new dynamic into an election year that has already witnessed a pandemic, civil unrest over racial inequality and an impeachment trial.

It also marks an extraordinary turn of events for US president Donald Trump and the millions of conservative voters who supported him in 2016, many reluctantly. Trump is now on the cusp of appointing a third supreme court justice in his first term, which would cement an ideological tilt of the court to the right for a generation.

While Trump initially expressed some sympathy when he apparently heard the news from reporters as he stepped off the campaign stage in Minnesota on Friday, he was soon back on familiar form, tweeting that he had an obligation to nominate a successor “without delay!” On Saturday night, crowds at a campaign rally in North Carolina shouted “Fill that seat! Fill that seat!”

The real decision on the choreography of the coming weeks will be made by Mitch McConnell, the top Republican in the senate. Though temperamentally very different, the two men have built a good working relationship, underpinned by McConnell’s zealotry for populating federal courts with conservative judges nominated by the president. Even before the death of Ginsburg, the confirmation of hundreds of conservative judges – some of them relatively inexperienced – promised to be one of the defining legacies of the Trump era.

Looming over the events of the next few weeks is McConnell’s refusal in the final year of Barack Obama’s presidency to consider his nomination for the supreme court, Merrick Garland, to replace the late Antonin Scalia. McConnell argued that the decision should be made after the presidential election, arguing that “the American people should have a say in the court’s direction”.

Now, apparently, the rules have changed. Within hours of Ginsburg’s death, McConnell confirmed the senate would vote on Trump’s nominee, arguing that it was different because the same party controls the senate and the White House.

Notably, however, McConnell did not specify timing.

While technically the appointment of a judge is doable before the election – Ginsburg was herself confirmed in 42 days in 1993 – the politics are more complicated.

McConnell has a relatively tight majority in the senate – 53 to 47 – meaning he can afford to lose few Republican votes. Some of the 21 senate Republicans seeking re-election on November 3rd, such as Susan Collins of Maine, are concerned at how the approval of a supreme court justice before an election will play with their voters, particularly in states where Trump is unpopular. Others such as Utah’s Mitt Romney and Alaska’s Lisa Murkowski have a track record of voting against Trump. Senator Lindsay Graham, who famously told a committee in 2016 that they could use his words against him in the future as he emphatically declared that a supreme court vacancy should not be filled in an election year, has now had a change of heart and says he will back Trump’s nominee.

Collins’ statement at the weekend that the senate should not vote before the election, leaves open the possibility that a nominee will be proposed before the election, but a vote held in the so-called “lame duck” session between election day and January when the new senate convenes. Trump has already said that he may announce a candidate, most likely a woman, this week.

If Democrats win back the senate in November – which polls suggest is a real possibility – this raises the prospect of a senate majority that has just been voted out approving a candidate nominated by a president who may have also been voted out if Joe Biden wins.

But delaying the vote until after November 3rd could also act as a motivator for Republicans to vote. With Trump behind in the polls, and his mishandling of coronavirus central in the campaign, the prospect of a third supreme court appointment could be just the thing to remind wavering conservatives why they voted for the thrice-married New Yorker in the first place.

However the coming weeks play out, the death of Ginsburg is a reminder of the flaws of the US legal and constitutional system. America now has a president who, despite coming second in the popular vote in 2016, has the authority to approve two and probably three supreme court judges.

This democratic deficit is also evident in the way the senate works. With each state in the union awarded two senators regardless of population, the 100-member senate is tilted towards rural, Republican-leaning, states that are given the same weight as populous states such as New York and California. This means that a Republican-controlled senate, which as a bloc garnered 18 million fewer votes than Democrats in the 2018 mid-term elections, has the power to approve a supreme court nominee for a lifetime appointment.

While Ginsburg’s death has upended the final weeks of the presidential campaign, the bigger question is what it says about the legitimacy of America’s third branch of government.

1 Woman stranded in Ireland due to pandemic has ‘miracle baby’
2 Behaviour is best Covid-19 vaccine available
3 Matthew McConaughey: ‘I wouldn’t give back one ass-whupping for the values that are ingrained in me’
4 Breathe easy to maximise your running experience
5 Covid-19: Critical cases from NI could put pressure on services in Republic
Real news has value SUBSCRIBE