America Letter: Virus presents problem for candidate whose greatest strength is as a retail politician who can connect with people 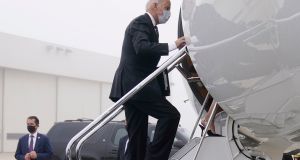 With just over five weeks remaining until the US presidential election, this has been a campaign like no other. Coronavirus, which has claimed 200,000 lives in the United States, has upended traditional campaigning. Both Democrats and Republicans were forced to hold their conventions mostly remotely – though Donald Trump pushed the boundaries of what is legally acceptable by hosting his acceptance speech at the White House.

As social distancing requirements have curtailed traditional election events, both campaigns have been forced to think up innovative online initiatives. Among the virtual offerings this week were an Evangelicals for Biden conference call and an online Women for Biden event with Hillary Clinton.

The Trump campaign has predictably been less conscientious about flouting social distancing guidelines, hosting a series of in-person events in swing states this week. The president’s daughter Ivanka was campaigning in Wisconsin on Friday while Kimberly Guilfoyle, the girlfriend of Donald Trump jnr, headlined a Women for Trump event in Pennsylvania. While Joe Biden has styled himself as the responsible alternative to Donald Trump when it comes to coronavirus, his strategy of sequestering himself in Delaware is not without political risk. While the former vice-president has expanded his travel schedule in recent weeks, prompted by concerning poll numbers that showed his lead over Trump narrowing, his campaign events are highly managed. Only a small pool of reporters are permitted to attend the events and local party officials are often kept in the dark.

Most significantly, members of the public are banned from coming anywhere near to the 78-year-old – a potential problem for a candidate whose greatest strength is as a retail politician who can connect with people. As the New York Times wrote this week: “Joseph R Biden jnr’s pandemic-era campaign appearances can resemble the pandemic-era NFL – quiet, eerie and almost entirely fan-free”, a reference to the American football games taking place in empty stadiums.

Eyebrows were also raised when his campaign called a “lid” – an indication that there would be no further public events or comments by the candidate – at 9.30am on a very busy Thursday. Five weeks before the election, it was a worrying sign, reviving bad memories of Hillary Clinton’s hot-and-cold relationship with the media during the 2016 campaign.

Biden’s running-mate Kamala Harris has also kept a relatively low profile since she was revealed to much fanfare as his vice-presidential pick. While the Biden team signalled that she would take a leading role in campaigning across the country, her recent visits to electorally important swing states such as Michigan and Florida have struggled to break on to the media agenda, perhaps because of the president’s relentless knack of dominating the news cycle.

The prospect of a Senate judiciary committee hearing into Trump’s nominee to replace Ruth Bader Ginsburg on the supreme court before the election will also keep Harris, a member of the committee, in Washington, though this could bring an upside. A former prosecutor, Harris shone during the Brett Kavanaugh hearings when she coolly eviscerated the controversial nominee. The prospect of another contentious confirmation hearing may giveher the national prime time platform she currently lacks. The Biden campaign has an obvious riposte to these criticisms – their approach helps keep the candidates and their supporters safe. And the sight of thousands of maskless supporters at the Trump rally in Ohio this week was enough to make top US infectious disease official Dr Anthony Fauci shudder.

But it also creates something of a vacuum when it comes to Biden’s main policy ideas. This week, in a rare to-and-fro with reporters, he gave vague, insubstantial responses to questions about two of the big issues of the week – the decision not to charge police officers with the shooting of Breonna Taylor and the supreme court nomination.

This may all change on Tuesday when the first of three presidential debates takes place in Ohio. For 90 minutes, the two candidates will face off on the debate stage, the absence of an audience another quirk of this election cycle. For Trump, who thrives on a crowd, it could be disconcerting. But Biden has the most to lose. He needs to demonstrate he has the tenacity and leadership skills the country needs. Some believe that simply by looking presidential and refusing to engage in Trump’s combative style of name-calling, he will rise to the occasion. His impressive convention speech and strong performance at a CNN “townhall” last week is also encouraging. However it plays out, Tuesday will be the first real test of the election campaign and the moment when many Americans will sit up and listen.