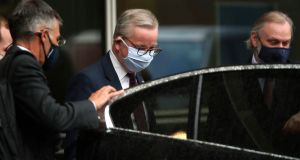 The UK government vowed it would persevere with a controversial Bill containing clauses that would break a deal reached last year with the European Union, despite an appeal by Brussels to reconsider.

Crunch talks have begun in Brussels to try to break deadlock over the future relationship between the bloc and its former member, with just weeks remaining to avoid deep economic disruption on January 1st if no deal is reached.

The contested clauses are an “extremely serious violation” of last year’s withdrawal agreement, the EU’s representative on the joint committee that oversees its implementation, Maros Sefcovic, told journalists on Monday.

The EU has warned the British government it may take legal action if it does not act by Wednesday to remove the clauses, which override arrangements relating to checks between Britain and Northern Ireland that were agreed last year to avoid a border on the island of Ireland.

But British cabinet minister Michael Gove said the clauses would not be removed, after he met with his counterpart Mr Sefcovic in the joint committee on Monday.

“But those clauses are there, they’re in legislation supported by the House of Common as a safety net if need be and those clauses will remain in that Bill.”

Both sides said they would continue talks to try to find a way forward. But EU sources insist that a deal cannot be reached if the Bill continues in its current form, as a new agreement cannot be signed with London unless it upholds the commitments of the prior one.

A mood of optimism from London ahead of the talks is not matched in Brussels, where diplomats are unsure whether the government of prime minister Boris Johnson is prepared to make the compromises necessary for a deal to be reached.

Chief negotiators Michel Barnier and David Frost are meeting for talks this week to try to overcome a long-running stand-off over fishing rights, state aid rules, and governance, three issues which are enduring sticking points in the negotiations.

Less than 100 days remain until Britain’s transition period ends, by which time new trade arrangements must have already been agreed and passed into law in order to avoid a jolt to the British economy and to Ireland that could snarl up supply chains.

Mr Sefcovic warned that there needed to be a sharp increase in the pace of preparations for arrangements at Northern Ireland’s ports and airports to be ready.

“The window of opportunity to put in place the operational measures needed for it to function is rapidly closing,” he said.