Poll puts Democrats ahead in some key races for Senate seats

US Democratic presidential candidate Joe Biden has warned people not to trust Donald Trump's suggestion that a Covid-19 vaccine may be near, calling the US president's response to coronavirus "close to criminal." Video: CNN 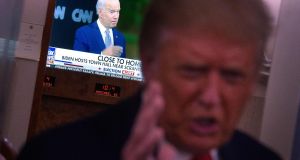 Democratic presidential candidate Joe Biden on TV as President Donald Trump speaks to reporters on board Air Force One after a campaign rally in Wisconsin. Photograph: AFP via Getty Images

US Republicans are becoming increasingly concerned they could lose their majority in the Senate in November as a new poll showed Democrats ahead in a handful of key races.

A third of the Senate’s 100 seats are on the ballot on November 3rd, and Republican incumbents in at least three states face an uphill battle to win re-election.

A new Siena College-New York Times poll found Democratic candidates were ahead in the Senate campaigns in Maine, Arizona and North Carolina.

This reflects strong support for Democratic presidential candidate Joe Biden, who is well ahead in all three states according to the poll of registered voters taken between September 11th and September 15th.

Mr Biden is registering a nine percentage point lead in Arizona, while he is 17 points ahead in Maine.

He has a lead of just one point in North Carolina, a state which Barack Obama won in 2008 and 2012, but voted for Donald Trump in 2016. In the North Carolina Senate race, however, Republican incumbent Tom Tillis looks set to lose his seat to Democratic challenger Cal Cunningham, according to the latest polling.

Republicans currently hold 53 of the 100 seats in the Senate.

The strong support for Mr Biden in Arizona will in particular worry Republicans. Historically the state votes Republican, but Democrats are hoping demographic changes and disillusionment with Mr Trump in the suburbs of Phoenix could see Mr Biden win the southern state. Vice-president Mike Pence campaigned in Arizona on Friday.

In the northeastern state of Maine, incumbent Republican senator Susan Collins, who has voted against her party on some occasions, faces a formidable challenge from Democrat Sara Gideon, the current speaker of Maine’s House of Representatives, who is ahead by five points, according to the Siena College-New York Times poll.

The new polling emerged as both Mr Trump and Mr Biden were due to campaign in Minnesota on Friday. The midwestern state has not voted for a Republican presidential candidate since Richard Nixon in 1972, but the Trump campaign believes it can win the state on November 3rd.

Both were due to hold campaign events in the heart of mining country in the north of the state. The area around Duluth, the main town in the district, was once reliably Democratic territory but has been trending Republican in recent years.

Their dual appearances come 10 days before the two candidates for president meet for the first of three presidential debates, scheduled to take place in Cleveland, Ohio, on September 29th.

Mr Biden, who has significantly increased his number of campaign appearances as his lead over Mr Trump in the polls has tightened, took part in a 90-minute CNN “townhall” event on Thursday night near Scranton, Pennsylvania, where he was born.

During the televised event Mr Biden stressed his working-class roots, highlighting the fact that he had not attended an Ivy League university. “Who the hell thinks you need an Ivy League degree to be president?”  he said.

“I really do view this campaign as a campaign between Scranton and Park Avenue,” he said, referring to Mr Trump’s home on Manhattan’s famous street.

“Guys like Trump, who inherited everything, and squandered what they inherited, are the people that I have always had a problem with, not the people who are busting their neck.”

He also said Mr Trump’s handling of the coronavirus outbreak was “close to criminal”.

He predicted that a timetable for a vaccine would be much longer than Mr Trump suggested, saying that he would take his lead from scientific experts such as Dr Anthony Fauci.