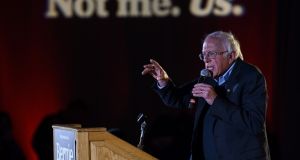 Democratic presidential hopeful Bernie Sanders has told supporters that his campaign has more donors than Donald Trump’s, and predicted he would raise more than $1 billion (€900 million) if he gets the party’s nomination.

Sanders is one of five Democratic candidates to qualify for the next debate on January 14th in Iowa. The other four are former vice-president Joe Biden, senators Elizabeth Warren and Amy Klobuchar and South Bend mayor Pete Buttigieg.

Sanders is currently second in primary polls behind Biden and he commands support among the left in the party.

“At $27 a piece, that would be more than $1 billion,” Mr Sanders said. “It’s absolutely obscene and outrageous that an election would cost that much money, but our campaign has proven we will be able to raise more than enough money to win.”

Mr Trump’s main re-election committee raised about $166 million through the end of September, according to the Centre for Responsive Politics. His campaign hasn’t yet reported fourth-quarter fundraising.

Bloomberg’s presidential campaign has bought $136.8 million worth of broadcast television time and $7.7 million on cable, according to data from Advertising Analytics, which tracks political ad spending. He spent an additional $10.8 million on digital ads.

The former New York mayor has spent $70.6 million more than Steyer, who is also relying on his personal fortune to fund his campaign. Bernie Sanders, the next biggest spender among Democrats, has purchased $19.3 million worth of paid media. Mr Trump has spent about $30.3 million so far, mostly on digital advertisements.

Unlike his rivals, Bloomberg isn’t spending in Iowa and New Hampshire, and instead has focused on states holding their nominating contests later in the year. The campaign has made seven-figure purchases of air time in markets in the delegate-rich states of California, New York, Texas, Illinois and Florida.