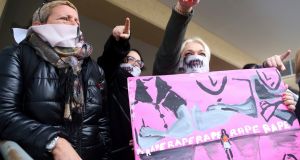 Protesters outside a court house in Paralimni, Cyprus, on Monday who believe the judgment is a product of a system that remains insensitive to gender and rape. Photograph: AP

Pressure is mounting on Cypriot authorities to reopen the case of a British teenager found guilty of lying about being gang raped, amid rising anger over the verdict.

Calls for a tourism boycott of the country were backed by the woman’s mother, who said Ayia Napa, the holiday resort in which her 19-year-old daughter said the attack took place, was unsafe.

The Derbyshire teenager said she was raped by up to 12 Israeli tourists in a hotel room on July 17th. But after she signed a retraction statement 10 days later, she was charged and a dozen men aged between 15 and 20 who were arrested over the incident were released.

Her mother said the woman, who had been due to begin university in September, was experiencing post-traumatic stress disorder, hallucinations and sleeping for up to 20 hours a day as a result of the condition hypersomnia.

During a two-month trial, the Briton claimed she had been forced to change her account under pressure from Cypriot police, telling the judge she was “scared for my life”. On Monday, she was ruled by a judge to have wilfully indulged in public mischief.

The teenager, who spent a month in Nicosia general prison before being bailed at the end of August, has been prevented from leaving Cyprus since July. She could face up to a year in prison and a €1,700 fine when she is sentenced on January 7th.

Within hours of the controversial court decision being announced, the boycott calls appeared on social media. The storm erupted as Britain’s foreign office, in a highly unusual step, also raised “serious concerns” over the woman receiving a fair trial.

On Monday judge Michalis Papathanasiou sitting in Famagusta’s district court pronounced that prosecutors had proved her guilt beyond a reasonable doubt.

The verdict has also put the government of President Nicos Anastasiades on the defensive.

As one of the region’s most popular destinations, with an economy greatly dependent on the tourist industry, calls to boycott the island have taken the affair to another level. UK tourists top the league tables of arrivals and Politis, a leading daily newspaper, described the Mediterranean country as being “up against the wall”.

But while government spokesman Kyriakos Kousios expressed sympathy for the Briton’s mother he also described public reaction to the case as exaggerated.

“I can understand the mother because she is the mother and I would expect any mother to do anything possible to help her daughter or son,” he said. “But we are not happy with the extent of publicity and the reaction, which has been exaggerated. We would have wished that these [boycott] calls hadn’t happened.”

The island nation’s court system, like its judiciary, is entirely independent of the state mechanism, insisted Mr Kousios. As a former crown colony, Cyprus’s legal system is based on British law.

“As a government we cannot, under any circumstances, intervene in a pending case before the court,” he said, repeating that court proceedings were initiated only after the student recanted her original rape complaint.

“What would happen if a Cypriot was brought before a court in the UK? Would the government intervene and would the Cypriots campaign to boycott England?” he asked.

Her lawyers have argued that in contravention of EU community law a statement retracting the rape claim was signed by the teenager without the presence of a lawyer and after eight hours of police interrogation that was neither videoed nor recorded. Determined to clear her name, they have vowed to take the case to Cyprus’s supreme court and, if necessary, the European court of human rights.

On Monday the judge argued that motivated by anger, the teenager had falsely levelled the rape claim against the Israelis, aged between 15 and 22, when she realised video clips of her having consensual sex with one of them had been recorded by others in the group on their mobile phones.

Her testimony before the court had been “evasive” and “contradictory”, he said. Protesters, led by women activists, have deplored the judgment. They call it the product of a system that remains insensitive to gender and rape.

As condemnation of the verdict grows so does internal dissent over the way the case has been handled. On Tuesday former attorney general Alekos Markides added to the criticism, saying the matter should have been wrapped up long ago instead of assuming such international proportions.

“It should have ended with the one-month prison sentence and not assumed such dimensions,” he told a local radio station.

As an offence, causing public mischief was among the lightest on the statute books, he said. Blaming the international outcry on the court’s obstinacy he also criticised the legal system for targeting “a 19-year-old tourist who we have kept in Cyprus for five months now, a . . . girl who has a clean criminal record . . . who we have forced to collect donations to cover her legal costs and have forbidden from travelling to her country. This rigidity of the court has provoked reaction internationally”. – Guardian