Why Thunberg didn’t speak to Trump: ‘I wouldn’t have wasted my time’ 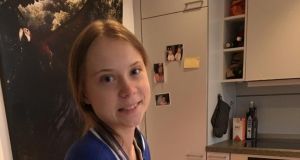 Greta Thunberg has said she wouldn’t have wasted her time talking to Donald Trump about climate change at the UN climate change summit in New York earlier this year – the same event she was pictured glaring at the one of the world’s leading climate-change deniers.

The Swedish climate activist made the comment during an interview on BBC Radio 4 on Monday morning, where she had been invited to guest-edit a programme.

Ms Thunberg (16), was asked what she would have said to the leader who pulled the US – one of the world’s leading carbon emitters – out of the Paris climate accord, and who has taken radical steps to undo decades-old US pollution standards.

She said: “Honestly, I don’t think I would have said anything. Because obviously he’s not listening to scientists and experts, so why would he listen to me?”

Ms Thunberg’s comments came several weeks after Mr Trump attacked her for being named Time magazine’s person of the year.

“So ridiculous. Greta must work on her Anger Management problem, then go to a good old fashioned movie with a friend! Chill Greta, Chill!” Mr Trump tweeted at the time.

She has also been attacked by Brazil’s far-right president Jair Bolsonaro. “It is staggering, the amount of coverage the press gives that brat,” Mr Bolsonaro said at the time.

Invited to respond to her critics, Ms Thunberg said: “those attacks are just funny because they obviously don’t mean anything”. She said:”I guess of course it means something – they are terrified of young people bringing change which they don’t want – but that is just proof that we are actually doing something and that they see us as some kind of threat. – Guardian