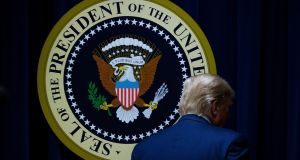 Donald Trump: “They [the Democrats] have zero proof of anything, they will never even show up. They want out. I want an immediate trial!” Photograph: Michael Reynolds/EPA

US president Donald Trump was due to fly to Florida on Friday night for the Christmas holiday season, as the impeachment trial remained in limbo amid a deepening stand-off between the two houses of Congress.

Mr Trump became the third president in history to be impeached when the Democratic-controlled House of Representatives approved two articles of impeachment against him on Wednesday over his dealings with Ukraine, following a three-month impeachment inquiry.

But, in a surprise move, House speaker Nancy Pelosi delayed moving the articles of impeachment to the Senate.

The House of Representative rose for Christmas on Thursday without voting on the next stage in the impeachment process, leaving the timing of a trial shrouded in uncertainty. With the House not scheduled to vote for the next time until January 7th, the Senate trial could be delayed until later in the month, despite Senate majority leader Mitch McConnell’s preference for a swift process.

Speaking to an almost empty Senate floor on the final day of the session, Mr McConnell said talks with Democrats about the impeachment trial were “at an impasse”. He said he had had a “cordial conversation” with Senate minority leader Chuck Schumer on the next steps for the trial, but claimed that “our friend from New York continues to insist on departing from the precedent”.

Mr McConnell said he favoured the two-step process agreed by the Senate during Bill Clinton’s impeachment in the late 1990s – an initial agreement to hear the prosecution and defence arguments, with a vote on whether to call witnesses at a later stage.

He also referenced suggestions – which have not been specifically denied by Ms Pelosi – that she could withhold the articles of impeachment indefinitely. “Other House Democrats say they would prefer never to transmit the articles,” said Mr McConnell. “Fine with me.”

Ms Pelosi has said the House will not vote on a resolution to transmit the articles, or to name impeachment “managers” – members of Congress who will act as House representatives in the Senate trial – until she is assured there will be a fair trial.

Among the key demands of Democrats is that the trial should call witnesses to testify, including senior figures who featured in the Ukraine inquiry such as White House chief of staff Mick Mulvaney and former national security adviser John Bolton.

Trump weighed in on Twitter, outlining his preference for an immediate trial.

“So after the Democrats gave me no Due Process in the House, no lawyers, no witnesses, no nothing, they now want to tell the Senate how to run their trial,” he tweeted. “Actually, they have zero proof of anything, they will never even show up. They want out. I want an immediate trial!”

Mr Trump spent his last full day in the White House signing a spending Bill that was agreed by Congress during the week, avoiding the possibility of a government shutdown, which paralysed Washington a year ago.

But in a worrying development for Mr Trump, the influential magazine Christianity Today, which was founded by evangelical preacher Billy Graham, called for Mr Trump to be removed.

“The president of the United States attempted to use his political power to coerce a foreign leader to harass and discredit one of the president’s political opponents,” an editorial stated. “That is not only a violation of the Constitution; more importantly, it is profoundly immoral.”

Mr Trump referenced the editorial on Twitter, claiming that the “far-left” magazine has been “doing poorly” and hasn’t been involved with Mr Graham’s family for many years.

He claimed that the publication would “rather have a Radical Left nonbeliever, who wants to take your religion & your guns, than Donald Trump as your President.”

“No President has done more for the Evangelical community,” he added.

Later he returned to the matter on Twitter, referencing an article on right-wing website Breitbart news which said that Franklin Graham, the son of the late preacher, voted for him in the 2016 presidential election.