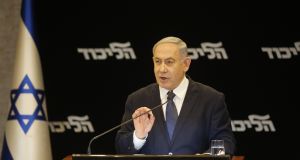 The move is likely to delay any trial until after March elections when he hopes to have a majority coalition that will shield him from prosecution.

Mr Netanyahu was indicted in November on charges of accepting bribes, fraud and breach of trust.

After failing to assemble a governing majority following back-to-back elections last year, he will get a third shot at remaining in office in March.

Wednesday’s announcement essentially turns the upcoming election into a referendum on whether Mr Netanyahu should be granted immunity and remain in office, or step down and stand trial.

A recent poll indicated that a majority of Israelis oppose giving him immunity.

In a nationally televised address, Mr Netanyahu repeated his assertion that he is the victim of an unfair conspiracy, lashing out at prosecutors, the media and his political enemies.

Claiming credit for a series of economic and security achievements on his watch, he said he would seek to invoke the law that would protect him from prosecution as long as he remains in office.

“In order to continue to lead Israel to great achievements, I intend to approach the speaker of the Knesset in accordance with chapter 4C of the law, in order to fulfil my right, my duty and my mission to continue to serve you for the future of Israel,” he said.

Normally, a request for immunity would need to be approved by the parliament’s House Committee and then submitted to a full vote.

But the House Committee does not exist because a government was never formed after September’s election.

Court proceedings cannot begin until the question of immunity is settled.

The opposition Blue and White party said it will seek to form the House Committee before the March election to take up the question of immunity.

But it remains unclear whether it will be able to move forward.

Parliament Speaker Yuli Edelstein, a member of Mr Netanyahu’s Likud Party, said he would hold talks on the matter next week.

“I never imagined that we would see the day that the prime minister of Israel would avoid standing before the law and the justice system,” he said.

Mr Netanyahu said he was not evading justice and still plans to go to court to fight the “fabricated accusations”.

“The law is meant to ensure that elected officials can serve the people according to the will of the people,” he said.

Should Mr Netanyahu succeed in assembling a 61-seat majority in favour of immunity, he would avoid prosecution.

But that still appears unlikely after the March vote, with most polls predicting another split decision that would leave Likud and Blue and White deadlocked, with neither able to secure a parliamentary majority.

The uncertainty means it could be many months before a new government is formed, leaving the question of immunity on hold with Mr Netanyahu remaining in office.

The indictment, on charges of trading political and regulatory favours for positive press coverage and accepting lavish gifts from wealthy supporters, marked the culmination of three long-running investigations.

Mr Netanyahu has dismissed the allegations as an “attempted coup” and has vowed to battle them from the prime minister’s office.

The question of immunity is just one of the hurdles Mr Netanyahu faces.

While Israeli law does not require a sitting prime minister to resign after being charged with a crime, it is vague about whether an indicted politician could be tapped to form a new government after new elections.

On Tuesday, Israel’s supreme court began discussions on the matter.

If the court decides Mr Netanyahu is ineligible, it could potentially bring his three-decade political career to an abrupt end after the March election.

The court gave no indication on when it would issue a ruling on the politically sensitive case.

Disqualifying Mr Netanyahu would deeply divide the nation and precipitate a legal crisis over separations of power.

The prime minister has long accused judicial and law enforcement officials of trying to drive him from office and repeated his claim on Wednesday night that only the voters can choose who will lead the country.

He received a boost last week when he easily defeated a senior Likud member in a primary election for the party leadership.

The vote shored up his base, but he faces a much greater challenge going into the general elections.

An opinion poll conducted this week by the iPanel and Midgam research firms found that 51 per cent of respondents oppose granting Mr Netanyahu immunity, with 33 per cent in favour.

The poll questioned 507 people and had a margin of error of 4.4 percentage points. – AP