Theresa May vows to stay as prime minister for ‘long term’ 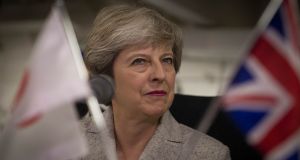 British prime minister Theresa May at Yokosuka naval base near Tokyo on Thursday. “I am not a quitter,” she told ITV. “I’m here for the long term and it’s crucial. Photograph: Stefan Rousseau/PA Wire

Theresa May has said she will fight the next UK election as prime minister, insisting she intends to remain in power “for the long term”.

Ms May’s promise confounded the expectations of most political observers, who expected her to exit the stage before the next election after losing her majority in the House of Commons at the last ballot this summer.

Asked on the first day of her trip to Japan by both the BBC and ITV if she intended to lead the ruling Conservative party into the next election, pencilled in for 2022, she replied “Yes” before underlining her determination to continue. “I am not a quitter,” she told ITV. “I’m here for the long term and it’s crucial,” she said to the BBC.

“What me and my government are about is not just delivering on Brexit. We are delivering a brighter future for the United Kingdom. ”

She was visibly irritated when asked by reporters on the flight to Japan about a report she planned to stand down in August 2019, saying there was “no basis for it”.

The prime minister may be hoping to lay to rest any early talk of succession as the Conservative Party approaches its annual conference in October. There has been speculation over a leadership challenge since her disastrous decision to call a snap election in June.

Conservative MPs had understood from an address by Ms May to Conservative backbenchers immediately after the election that she was focused mainly on steering the UK through its departure from the EU in March 2019 before stepping down.

Many Conservative MPs have been content to let Ms May stay on as party leader, expecting that she would make the hard choices associated with the Brexit process, leaving them free to install a new party head when she departed.

But Ms May stressed, in comments to reporters on the way to Japan and in TV interviews, that she had far wider objectives than merely steering the country through the Brexit process. Her apparent change of heart might prompt some MPs to revisit whether they are content to let her continue in office.

“We need to get the Brexit deal right, deliver the right deal for the people of the UK,” Ms May told Sky News. “But we also need to ensure that, after we have left the European Union, global Britain is out there trading around the world, standing tall in the world and that we deal with some of the remaining injustices at home.”

Ms May’s comments follow a bruising summer in which rival camps among her cabinet have lobbied for a rethink of vital aspects of her policies on Brexit.

The visit to Japan is intended to showcase the potential for the UK to strike new future trade deals after departure from the EU.

She added that she wished to use the EU’s prospective trade deal with Japan as the basis for a future UK-Japan deal, and also announced a security co-operation that would see UK troops take part in joint military exercises in Japan, becoming the second country to do so after the US.

The agreement will also see the UK offer cyber security and counter-terrorism expertise to Japan ahead of the Toyko Olympics in 2020.