Brexit could ‘lead to shortage of medicines’ in Ireland 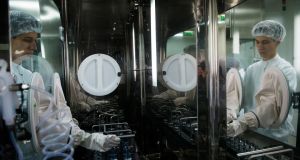 Brexit could lead to shortages of medicines in Ireland and higher costs for an already overstretched HSE drug budget, an industry group has warned.

Medicines for Ireland, which represents the generic pharmaceuticals industry in Ireland, says the UK’s departure from the customs union and single market could also create significant problems for drug companies as they are forced to comply with two separate regulatory regimes.

The comments come ahead of a Brexit stakeholder event being hosted on Thursday by the Health Products Regulatory Authority, which polices medicines and medical devices in Ireland.

Sandra Gannon, country head for the generics giant Teva, who is speaking at the event, said Brexit posed a significant risk to patients. Border delays will increase red tape and costs for the HSE, as well as delaying the movement of medicines, especially in emergencies.

She said that every hour of customs delay added to the cost of trade and that it was hard to see how delays could be avoided if a hard Border were reinstated. Two regulatory regimes would inevitably mean more paperwork, slowing down production and the supply chain.

And if new regulatory procedures meant an end to batch sharing, the relatively small size of the Irish market could make it commercially unsustainable for British manufacturers to continue supplying it, she said.

“That would seriously damage Ireland’s interests, both in terms of patient access to medicines and the inevitable rise in cost which would occur.”

The HSE is already struggling to meet rising demand for medicines and the escalating costs of some new-generation therapies.

“Already 140 medicines are out of stock in Ireland, and we are at risk of further shortages due to Ireland’s dependence on the much larger British market,” Ms Gannon said.

Medicines for Ireland said it was critical that the UK remained within the European Economic Area, or EEA, where it would remain under the European Medicines Agency’s regulation but would have free access to EU markets.

“The worst-case scenario,” Ms Gannon said, “would be if the UK opts for a Swiss model, leaving the EEA and the customs union.”