Amsterdam to step up security after Spain terror attacks 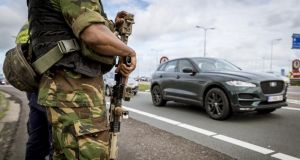 Terror threat: a soldier on patrol around Amsterdam in 2016; the country’s threat level remains at its second highest. Photograph: Remko de Waal/AFP/Getty

Amsterdam, one of Europe’s most popular tourism destinations, is to put new security measures in place to help prevent a terror attack similar to the vehicle attacks in Barcelona and Cambrils this month that left 16 people dead and 120 injured.

Almost six million people visit the Dutch capital every year, most of them packed into the network of narrow streets inside the “canal belt”, particularly around the red-light district of De Wallen, and Kalverstraat, the local shopping equivalent of the Ramblas, in Barcelona.

The terror-threat level in the Netherlands remains at its second highest, meaning there’s a “real chance” of an attack – although the mayor of Amsterdam, Eberhard van der Laan, said the new measures were a general precaution not prompted by any fresh intelligence.

“The attacks we’ve seen abroad show that terrorists can strike any place, at any time, and in dozens of different ways,” the mayor said. “The measures fit with the current threat level, though they will not be so restrictive that they will paralyse the city. We have to be prepared.”

The city authorities are to consult the police, the security services and emergency responders, and they say they will meet city-centre retailers and management at the main cultural and tourism locations to ensure proper co-ordination of prevention and response.

The new security measures were announced as two of Amsterdam’s must-visit cultural destinations, the Van Gogh Museum and the Rijksmuseum, both in the heart of the city, came second and third in a global ranking of cultural institutions, topped by the Louvre, in Paris.

But the only place specifically mentioned by Mr Van der Laan was Kalverstraat, which he said was a prime example of a location where security measures would be taken.

Although in a recent Dutch survey only 6 per cent of respondents said they felt unsafe while shopping, 40 per cent said they would like to see more concrete barriers on city streets – a figure rising to 57 per cent among over-65s.

However, although there have been seven vehicle attacks in Europe this year, and limiting vulnerability is a good strategy, one terrorism expert, Dr Edwin Bakker, says barriers have a limited effect. “If they want to, attackers will simply find a place where there are no concrete blocks.”

At the same time, following the cancellation of a rock concert in Rotterdam a week ago, the defence ministry’s senior adviser on national security, Brig Gen Wilfred Rietdijk, has called for a new body to counter threats such as manipulation of the media and the spread of “fake news”.