North Korea has fired a missile that flew over Japan and landed in the Pacific waters off the northern region of Hokkaido, South Korea and Japan said, in an escalation of tensions in the region. The launch activated sirens and alarms in Hokkaido. 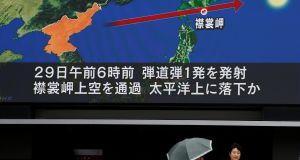 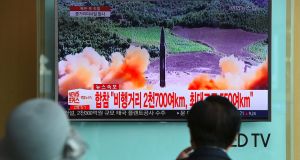 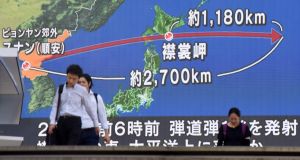 Pedestrians walk in front of a huge screen displaying a map of Japan (R) and the Korean Peninsula, in Tokyo on Tuesday. Photograph: Kazuhiro Nogi/AFP/Getty Images 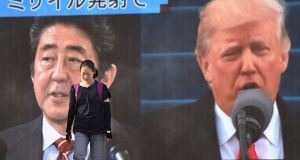 Tensions in north east Asia flared on Tuesday as North Korea launched a missile test over Japan, representing one of the most provocative moves by the nuclear state in more than two decades.

A ballistic missile, believed to be capable of carrying a nuclear warhead, was launched from the main airport in the capital Pyongyang in the early hours of Tuesday morning, travelling over the northern island of Hokkaido before landing in the sea almost 1,200km east of Japan.

The missile - the third to fly over Japan since 1988 - appeared to be a Hwasong-12, the kind of ballistic missile the country had threatened to send to the waters near the US territory of Guam earlier this month and was first displayed at a military parade in May.

The UN Security Council was scheduled to discuss North Korea at a closed session on Tuesday.

The strike also generated a terse admonition from Washington with US president Trump warning that “all options” were on the table regarding the North Korean nuclear threat.

“The world has received North Korea’s latest message loud and clear: this regime has signalled its contempt for its neighbours, for all members of the United Nations, and for minimum standards of acceptable international behaviour,” Mr Trump said in a statement before leaving for Texas.

“Threatening and destabilising actions only increase the North Korean regime’s isolation in the region and among all nations of the world. All options are on the table.”

The US and Japanese leaders spoke by telephone for 40 minutes following the event, while Mr Trump also spoke with the prime minister of Singapore.

The missile launch is the 18th by North Korea this year, and is perceived as a response to the increase in military activity in the southern Korean peninsula where 17,500 US troops are participating in annual war games with South Korea.

“Now that the US has openly declared its hostile intention towards DPR Korea by raising joint aggressive military exercises despite repeated warnings... my country has every reason to respond with tough counter-measures,” North Korea’s ambassador to the United States said.

Tuesday’s missile launch comes days after North Korea fired several short-range missiles into the Sea of Japan over the weekend.

Last week, Mr Trump suggested in a speech in Arizona that his threat earlier this month to respond to North Korea with “fire and fury like the world has never seen” was beginning to bear fruit, claiming that North Korean leader Kim Jong-un was “starting to respect us.”

Though Tuesday’s missile was the third to be fired over Japan in almost three decades, in the previous two cases North Korea said the rockets were carrying satellites into orbit. That claim was not made on this occasion.

Minister for Foreign Affairs Simon Coveney said the missile launch was a “real threat to peace and security in the entire North East Asia region and beyond.”

“It is an unacceptable and provocative violation of the DPRK’s international obligations not to conduct such tests and I unreservedly condemn such actions,” he said, referring to North Korea.