Why Little England Brexiteers miss the point of the European Union

Europe Letter: You don’t have to love the EU to see that it plays a vital role 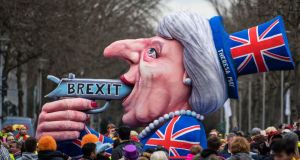 Self-destructive?: Theresa May seems to hate the European Court of Justice, but any post-Brexit trade deal will involve an ECJ by another name. Photograph: Lukas Schulze/Getty

When Voltaire suggested that “If God did not exist, it would be necessary to invent him,” he was not denying the existence of God. Or, as some of his followers have argued, cynically putting down religion. On the contrary, the line forms part of a poetic polemic against atheism. And his point is that a God is an imperative to good social order, a necessary foundation of ethics, morality and co-operation: “This sublime system is necessary to man. It is the sacred tie that binds society.”

Which brings me, convinced atheist, somewhat improbably you may think, to Brexit and to the fundamental flaw in the UK’s negotiating position: its inability to come to terms with the reality, pace Voltaire, that, in this age of globalisation and sovereignty-sharing, “If the European Union did not exist, it would be necessary to invent it.”

Or reinvent it by another name, in broadly the same form, a process we are painfully witnessing in Brussels in the Brexit talks, and the reason why the British are finding it so difficult plausibly to explain where they stand.

An obsession with the foreignness of all things “European” has obscured the argument for the EU from the point of view of its function: it performs essential tasks that we and the UK need performed, from the regulation and control of an open trading market, or the protection of external frontiers, to co-operation in environmental projects or scientific research.

Not so, say the British; after all, we are leaving the European Union but not Europe. Ha!

But it is meaningless rhetoric to most member states – the European Union, however imperfect, is the means by which Europeans, most Europeans, co-operate permanently and effectively, the functional expression of “Europe”.

Take Theresa May’s apparently visceral hatred of the EU’s European Court of Justice (and of the Council of Europe’s European Court of Human Rights – ironically, in no small measure, a creature of British initiatives). The prime minister considers the involvement of foreign judges in ruling on “British” law anathema – so one of the UK red lines consists of no longer having to abide by this court.

But the UK wants to do a trade deal post-Brexit with the EU, and all trade deals now involve some means of judicial arbitration between the parties over disputes of interpretation. So it is inevitable that the UK will have to agree to establish and accept the jurisprudence of an international tribunal staffed in part by “foreign” judges, British judges and, heaven spare us, EU judges. An ECJ by another name.

Or take the customs union. In one of its draft proposals, for a “partnership” with the EU, the UK would to all intents and purposes pretend it was still part of the EU customs union by mirroring the EU’s requirements for imports from the rest of the world where their final destination is the EU, but setting in place a complicated tracking regime for goods destined for the UK alone from states with which it proposes to have its own, different trading relationship.

A bureaucratic nightmare for business but different in principle from the customs union the UK proposes to leave only in sustaining the myth that out there is a world only waiting to offer the UK better trade terms than it offers the EU.

The EU, however imperfect, is the means by which most Europeans co-operate permanently and effectively, the functional expression of ‘Europe’

In some cases there will be no need to reinvent the EU by another name: the UK is simply hoping to stay, or pay its way back into, for example, the EU’s scientific research programme, or the European Common Aviation Area and aviation’s common regulator in the European Aviation Safety Agency. And we’ll just not mention the role of the ECJ in all the latter.

You don’t have to love the European Union to acknowledge its necessity in some form in the modern age. Yes, it has a democratic deficit. Yes, it appears to work more for business than for ordinary citizens. But Brexiteers’ Little Englander obsession with the idea itself, with its otherness, misses the point.

“ ’Tis but thy name that is my enemy . . .
O be some other name.
What’s in a name? That which we call a rose
By any other name would smell as sweet.”