After months of ambiguity, Labour has adopted a clear policy favouring a ‘soft’ Brexit 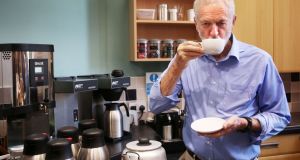 Jeremy Corbyn: he has ensured that the British government will face a treacherous task as it seeks to pass the huge European Union (Withdrawal) Bill. Photograph: PA

Labour’s latest policy shift is the most important development in the politics of Brexit since Theresa May’s Lancaster House speech last January established Britain’s red lines in negotiations with the European Union. It comes as Brexit secretary David Davis travels to Brussels on Monday for the third round of negotiations with the EU, following the publication of a number of British position papers on aspects of Brexit.

The prime minister in January ruled out remaining in the Single Market and the Customs Union, as well as the continuing jurisdiction of the European Court of Justice (ECJ) in Britain after it leaves the EU in March 2019.

After months of deliberate ambiguity, Labour has adopted a clear policy in favour of a “soft” Brexit, accepting the outcome of last year’s referendum but calling for Britain to remain full members of the Single Market and the Customs Union for up to four years after it leaves the EU.

This would mean that Britain would continue to pay into the EU budget, the ECJ would retain jurisdiction, and free movement of people would continue.

It would temporarily avoid the worst consequences of Brexit for Ireland, including the issue of how to police a customs border on the island.

And by postponing the implementation of a final exit deal with the EU, it holds open the possibility that Britain could change course and seek the closest possible relationship as a non-member, similar to that enjoyed by countries like Norway and Switzerland.

More immediately, Labour’s shift has transformed the parliamentary arithmetic as MPs prepare to return to Westminster next week. By placing his party firmly on the side of a soft Brexit, Jeremy Corbyn has ensured that the government will face a treacherous task as it seeks to pass the huge European Union (Withdrawal) Bill.

May’s confidence and supply deal with the DUP gives her a working majority of 13, so that just seven Conservative rebels can trigger a defeat for the government.

The parliamentary arithmetic of Brexit is complicated by the presence of a small rump of diehard Brexiteers on the Labour benches and a larger group of Conservatives who favour a soft Brexit.

There is little doubt, however, that Corbyn’s move has created a majority in the Commons who favour a soft Brexit.

The move highlights a feature of Corbyn’s leadership which is often overlooked – his willingness to compromise on policy in pursuit of success for his party. Labour’s election manifesto was more left-wing that most of his MPs initially wanted but it also included policies Corbyn personally opposes, such as the retention of the Trident nuclear missile programme.

Labour’s ambiguity on Brexit was driven by the political imperative before the election to avoid alienating supporters who voted Leave and to prevent the Conservatives from making Brexit the central choice in the election.

The strategy was successful, but political conditions have changed since the election, not least because of Corbyn’s success in holding Labour seats in its industrial heartland and making gains in the southeast and in Scotland.

Most of Labour’s gains – and its new target seats – are in areas which voted Remain, and recent polls show clear majorities among Labour supporters and members for a clear policy in favour of a soft Brexit.

The scent of power is a great adhesive, and the unexpected prospect of returning to government after the next election should ensure that Labour MPs and activists will rally around the new policy on Brexit.