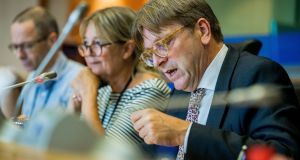 As British and EU negotiators embarked on their first serious attempt to discuss the UK Brexit bill, the UK presented its detailed legal analysis of the EU’s demands for what might total €100 billion and highlighted a huge gulf in their respective positions.

While the UK team acknowledged again that Britain faces “survivable obligations” to the EU budget after Brexit, it dismissed the “top down”, “simplistic” methodology for calculating the bill from the European Commission.

The negotiations continued in Brussels on Wednesday at the commission HQ in five working groups, with the UK team again repeating its wish to move immediately beyond phase-one talks on divorce terms to those on the future relationship .

Published British positions papers, and specifically those on Northern Ireland and the Customs Union, have sought to weave notionally “inseparable” second-stage trade issues into the discussions on divorce issues. However, the EU negotiating task force is insisting on its mandate that such discussions be held off until “sufficient progress” is recorded in phase-one talks.

Diplomatic sources say there has been no demand or sympathy at heads of government level for any weakening of that requirement which is seen as crucial to reassuring member states that monies already committed to them under the multi-annual budget (Maff) will be paid.

British negotiators, still smarting from media and commission suggestions they are unprepared or unwilling to advance the process sufficiently fast, boasted of their 43-page legal response to the commission’s four-page document on the settlement.

And they are understood to feel that the commission team is too closely tied to its mandate from heads of government to be able to demonstrate flexibility in the discussions.

The discussions on Northern Ireland began again on Wednesday afternoon, and were expected to have focused on commission concerns that the British paper on the North published 10 days ago failed to explain how it proposed to ensure that the 12 areas of cross-Border co-operation legally enshrined in the Belfast Agreement and EU legislation would be protected after Brexit.

There has been some broad welcome to the aspirations expressed in the UK paper but concern at the lack of specifics.

In the discussions on Wednesday on the financial settlement, the trickiest part of phase-one talks, British officials again referred to the seven-year Maff agreed by member states and the parliament as a “planning tool” for the next period rather than a legally-binding  financial obligation on member states.

The British case is that it sets ceilings on spending under various headings and is later radically revised during the annual budget process when real legal obligations on each state arises.

The commission methodology for calculating the UK Brexit bill involves dividing the Maff by the agreed historic share allocated to each member state. This ”top down” approach inflates UK obligations, the British say, and incorporates spending yet to be formally agreed for after they leave. They propose instead to examine the legal base of each broad programme’s spending each year, a “bottom-up approach”.

There was also an opening discussion on the division of EU assets, with the gap between the EU and UK on the value of the latter’s share of the union’s biggest asset, the European Investment Bank,reportedly put at between €2 billion and €11 billion.

One particular logjam in what are heavily technical discussions is agreement on the status of goods in the market but not yet sold on the day the UK leaves.

A particular challenge arises with defining what goods are in a supply chain and therefore whether they should be taxed. It is a complication that would not arise if there was agreement on a new trade relationship or a transition deal.  But that, as the EU team would point out, would be to put the cart before the horse. So it will have to be thrashed out before October.