Why Ireland should seriously consider Irexit 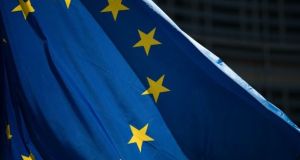 Irexit would restore a measure of control over the development of our resources and the autonomy to develop them. Photograph: Jasper Juinen/Bloomberg

We need to talk about Irexit. Seriously. If you put your head around the door of any of the innumerable meeting rooms in which all things Brexit are being dissected, the one word that dares not speak its name is Irexit. The foolhardiness of the Brits? Yes. How badly organised and divided they are? Of course. How unrealistic their expectations are? Certainly.

With a few distinguished exceptions, “official” Ireland has bought into the “spin”’. It has made the European Union the custodian of our national interests. It has ceded its responsibility for negotiations on our future relationship with our nearest neighbour and largest single-country trading partner. This makes no sense. The risks of trading the approval of “Europe” for the long-term interests of the country are enormous.

Behind the charade of a “unified stance” on Brexit is a deeply divided EU with competing national agendas which have been whipped into a facile unanimity. The pressure not to break ranks is huge. In his acclaimed book Adults in the Room: My Battle With Europe’s Deep Establishment, former Greek minister for finance Yanis Varoufakis documents the devastating reality of such pressures.

Because what the UK is exiting is not Europe, but what Europe has become. Tragically, it is not the Europe of Schumann and Monnet or even Jacques Delors.

Brexit means Ireland, which shares a common stance on key issues with the UK, is left marginalised, peripheral and dependant

It is a hegemonistic and increasingly militarised political behemoth, controlled by Germany and, to a lesser extent, by a Franco-German identity of interests. Europe is bound together by an oppressive dependency on the centre. Political scientists know that even the largest of other countries play in the reserves.

Europe’s identity and its founding values have been scarred by the macroeconomics of austerity and an unprecedented migration catastrophe caused, in part, by its support for military adventurism in the Middle East and North Africa.

At its heart is a flawed monetary union, skewed towards surplus countries and a yawning “democratic deficit”. Brexit should have been the catalyst for reform. Instead, freed for the moment of the threat of “populism” generated by its own policies, the establishment has pulled down the shutters on reform. It is now impelling members towards full political union and, beyond that, further supra-national enlargement.

Brexit means Ireland, which shares a common stance on key issues with the UK, is left marginalised, peripheral and dependant. That reality bears reflecting upon.

The core responsibility of any sovereign nation is to protect the national interest. Down the road, who will uphold and advocate Ireland’s national interests? Whatever the nature of the post-Brexit governance of Europe, little consideration will be given to Ireland’s needs and its capabilities. How could they be? On all issues that matter, the centre will advance its own agenda.

Amnesia can be a terrible thing. It is only prudent to remember that in the bailout negotiations the European Central Bank (ECB) cut the ground from underneath Ireland when we were at our most vulnerable. Ajai Chopra, then IMF mission chief, recalls it was the International Monetary Fund – not Europe – that advocated against the harshness of the adjustment which the ECB attempted to impose and, also, ECB pressure to impose on Ireland losses that should have been borne by the bondholders of delinquent banks. The threats of what would happen if Ireland did not come to heel came from Europe.

Old battles should not be refought – we move on. But we should learn. Facing into a post-Brexit scenario it’s clear that we cannot look to Europe to advocate Ireland’s national interests.

All of the economic modelling in the world will not resolve what is an essentially political question. Are Ireland’s national interests best served by being irrevocably integrated into this kind of Europe – one which would fossilise the Border across the island, put at risk our future relationship and multiple linages with our nearest neighbour including an EU-imposed “hard Brexit”.

Alternatively, would the national interest be better served by a “managed Irexit”, alongside Brexit?

Irexit would restore a measure of control over the development of our resources and the autonomy to develop them, free from the suffocating oversight exercised from the centre. It would provide greater policy flexibility in relation to the labour market which took the “hit”, in the form of massive emigration, during the EU’s “austerity regime”. It would mitigate Ireland’s vulnerability to EU pressures on its “business model” which, as Wolfgang Munchau writing in the Financial Times, has pointed out is no longer “fit for purpose”.

Membership of the Single Market and Customs Union benefit Ireland – just as they do other countries including Germany which runs a troublingly massive current account surplus. Ireland is also a net contributor to the EU budget. The exploitation of our maritime resources amounts to a significant “contribution” to other EU members.

“Europe” would, of course, be viscerally opposed to Irexit alongside Brexit. We would probably experience the same opprobrium and determination to “make us pay” as the UK has – including a campaign (all too familiar) to “think again”. Foolish. The EU itself has every reason to facilitate a constructive separation. Our politics should be talking Irexit. Priority.

A dependent relationship, held together by pressures and threats, is not healthy for a couple – or for a political union. A friendship, characterised by mutual respect and an acknowledgement of the interests of each of the parties, and their shared interests, is infinitely to be preferred.

Ray Kinsella is an economist and former  Professor of Banking and Financial Services, and Healthcare at UCD Michael Smurfit Graduate School of Business

1 Fianna Fáil may have just pressed the pause button on the property market
2 Eating out in Dublin – the homeless way
3 UK to prioritise EU trade deal over one with United States
4 Which jobs do teenage girls and boys aspire to have by age 30?
5 Irish Times poll: Large majority want change of government
Real news has value SUBSCRIBE