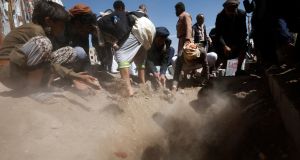 Yemenis bury the body of a Houthi fighter allegedly killed in recent fighting with Saudi-backed government forces, at a cemetery in Sanaa. Photograph: Yahya Arhab/EPA

US and international aid agencies have criticised the Trump administration’s decision to brand as “terrorists” Yemen’s rebel Houthis, saying it will cost lives in the war-ravaged country.

The administration’s move is aimed at ramping up sanctions on Iran and its allies ahead of the inauguration of a Biden administration on January 20th.

Oxfam America’s Scott Paul said key exceptions to a sanctions regime must be in place ahead of December 1st, the date when the new measure is due to take effect. “These will mitigate some of the harm, but this decision will still ultimately cost lives in Yemen, ” he told the Washington Post.

Aid groups argue that US sanctions will reduce their ability to deliver food and medical supplies, and disrupt the flow of commercial goods to the 70 per cent of Yemenis who dwell in Houthi-held areas, at a time when coronavirus and famine are posing dire challenges. Although US officials have scrambled to provide remedies once the designation is made, it could take time to enact exceptions as well as provide waivers.

Due to the war, more than 80 per cent of Yemen’s 28 million people are in need of humanitarian assistance and half of them face famine. The World Food Programme, which strives to feed 13 million a month, has pointed out that the rate of “child malnutrition is one of the highest in the world and the nutrition situation continues to deteriorate”.

In March 2015 Saudi Arabia and the Emirates launched a war on the Houthis, claiming they were Iranian surrogates. Though there was little evidence of this at the time, the Houthis, who remain independent of Tehran, have since accepted limited logistical and military aid.

In response to the US move, the Houthis could seek additional Iranian backing, exclude from their area aid from certain humanitarian agencies and refuse to resume UN-brokered negotiations on a ceasefire and peace deal.

Prolonging the war will add to the hundreds of thousands of Yemeni lives already consumed by fighting, disease and hunger.

Although some state department, USAID and Pentagon officials reportedly oppose the anti-Houthi measures, secretary of state Mike Pompeo remains determined to pile new sanctions on Iran and allies in a “maximalist pressure” campaign.