Joe Biden’s team: Who are the president-elect’s first appointments? 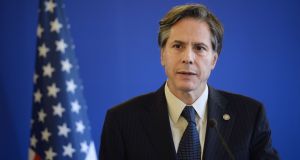 Antony J Blinken: the new secretary of state-elect has been a close ally of Biden’s for two decades. Photograph: Stephane De Sakutin/AFP/Getty Images

Blinken (58) has been a close aide to Joe Biden for two decades. He served as deputy secretary of state and deputy national security adviser in the Obama administration. Hailing from a family of diplomats, he was educated in Paris and is a strong believer in the transatlantic relationship. He is also a keen guitarist.

A close ally of Blinken, Jake Sullivan (43) served as national security adviser to Biden when he was vice-president. He also worked for Hillary Clinton for years, and was involved in her work on Northern Ireland. He was a signatory to a 2019 letter to Theresa May signalling concern about Brexit and Northern Ireland.

Another alumni of the Obama administration, Haines (51) served as deputy national security adviser and was the first female deputy director of the CIA. She first worked with Biden when she was deputy chief counsel and he was chair of the Senate foreign relations committee. She has degrees in physics and law.

Kerry (76) served as secretary of state during Barack Obama’s second term. The former Massachusetts senator ran unsuccessfully for president in 2004 against George W Bush. A decorated Vietnam veteran, he is a fluent French speaker and signed the Paris climate agreement on behalf of the United States in 2015.

A career diplomat, Linda Thomas-Greenfield worked as a consultant with Madeleine Albright’s firm since her retirement in 2017. During her 35-year-career, she served as ambassador to Liberia and held postings at the UN, Pakistan, Jamaica and across Africa. Biden will restore the UN ambassador role to cabinet-level status after it was downgraded by Trump.

Mayorkas will be the first Cuban-American and immigrant to serve as secretary of homeland security. The 61-year-old held senior roles in the department and the US citizenship and immigration services during the Obama administration. A former federal prosecutor, he was been working as a private lawyer since 2016.