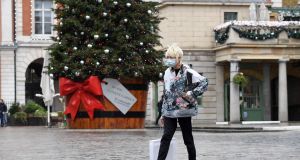 A woman wearing a mask against coronavirus in a near-deserted Covent Garden in central London. Photograph: Justin Tallis/AFP via Getty Images

Boris Johnson has promised to extend Britain’s global influence and restore its place as “the foremost naval power in Europe” with a £16.5 billion increase in defence spending.

The prime minister said the package of measures, which include new warships, an airforce space command and an artificial intelligence (AI) agency, marked the end of a long period of defence cuts.

“For decades British governments have trimmed and cheese-pared our defence budget. If we go on like this we risk waking up to discover that our armed forces – the pride of Britain – have fallen below the minimum threshold of viability, and once lost they can never be regained,” he told the House of Commons.

Mr Johnson, who addressed the House by video link because he is self-isolating after coming into contact with someone with coronavirus, plans to publish an integrated review of Britain’s foreign and defence policy in the new year.

His announcement of increased defence spending comes a week before chancellor Rishi Sunak will outline a spending review that is expected to emphasise the huge impact coronavirus has had on Britain’s public finances.

Mr Johnson said that reviving the armed forces was a necessary step in securing Britain’s interests and strengthening its global influence.

“The international situation is now more perilous and intensely competitive than at any time since the Cold War. Everything we do in this country – every job, every business, even how we shop and what we eat – depends on a basic minimum of global security, with a web of feed pipes, of oxygen pipes, that must be kept open: shipping lanes, a functioning internet, safe air corridors, reliable undersea cables, and tranquillity in distant straits.

“Britain must be true to our history and stand alongside our allies, sharing the burden and bringing our expertise to bear on the world’s toughest problems. To achieve this we need to upgrade our capabilities across the board.”

The prime minister said orders for new warships would boost shipbuilding across the UK, including in Belfast.

But he said the armed forces must move away from some of the more expensive forms of military hardware and instead use new technology to multiply the fighting power of every ship, aircraft and infantry unit.

“This will allow our new investment to be focused on the technologies that will revolutionise warfare, forging our military assets into a single network designed to overcome the enemy.

“A soldier in hostile territory will be alerted to a distant ambush by sensors on satellites or drones, instantly transmitting a warning, using artificial intelligence to devise the optimal response and offering an array of options, from summoning an airstrike to ordering a swarm attack by drones, or paralysing the enemy with cyber-weapons,” he said.

Keir Starmer said that under his leadership national security was Labour’s top priority, and he welcomed the extra spending on defence. However, he said the government was making “a spending announcement without a strategy”, with no clarity over strategic priorities.