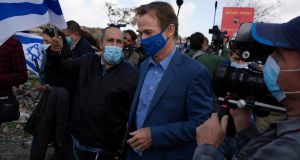 Sven Kuhn von Burgsdorff, the European Union representative for the Palestinian Territories, is heckled as he visits the construction site for Givat Hamatos settlement in East Jerusalem. Photograph: Maya Alleruzzo

The head of the European Union’s mission to the West Bank and Gaza Strip, Sven Kuhn von Burgsdorff, was chased away from a politically sensitive Jerusalem neighbourhood on Monday by Jerusalem deputy mayor Aryeh King and right-wing activists.

The fracas in the southeast Jerusalem neighbourhood of Givat Hamatos occurred the day after Israel issued tenders for the construction of an additional 1,257 homes in the area, which lies over the 1967 green line border between Israel and the West Bank, in an area the Palestinians seek as the capital of a future independent state.

Opponents of the project say it would sever east Jerusalem from the nearby Palestinian town of Bethlehem in the West Bank.

Mr King and pro-settlement activists waved Israeli flags over the heads of the European diplomats from 13 EU member states and shouted at them to go home, calling them “anti-Semites and hypocrites”.

Earlier, the EU’s foreign policy chief Josep Borrell said he was deeply worried by the settlement expansion and called on Israel to reverse its decision.

“This is a key location between Jerusalem and Bethlehem in the occupied West Bank,” he said in a statement. “Any settlement construction will cause serious damage to the prospects for a viable and contiguous Palestinian state and, more broadly, to the possibility of a negotiated two-state solution in line with the internationally agreed parameters and with Jerusalem as the future capital of two states.”

The new tenders appear to be part of an Israeli plan to expedite settlement construction ahead of January’s inauguration of Joe Biden as United States president. The final date for submission for the tenders is January 18th, two days before Mr Biden assumes office.

“These days are an opportunity that will not repeat itself to entrench our hold on the land of Israel,” said Knesset member Miki Zohar, of Binyamin Netanyahu’s ruling Likud party. “I am certain that [US]president [Donald] Trump and prime minister Netanyahu will work to utilise them in the best way possible.”

The Trump administration has turned a blind eye to settlement expansion, declaring last year that it did not consider settlements to be illegal under international law. In January, Washington unveiled a Middle East peace plan that placed all West Bank settlements under permanent Israeli control.

Mr Biden has described settlements as illegal and, in 2010, during his term as vice-president, publicly criticised Israel when plans were unveiled for more construction in the east Jerusalem neighbourhood of Ramat Shlomo when he was visiting the country.