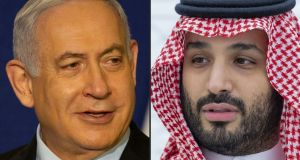 Mr Netanyahu, accompanied by Mossad chief Yossi Cohen, used a private plane belonging to a businessman friend, which he has used for past diplomatic trips. The plane left Israel at 5pm on Sunday and returned after midnight.

The talks in the Saudi Red Sea resort of Neom were leaked to the Israeli media on Monday morning and mark the first known meeting between leaders of the historical foes, who have drawn closer in recent years as both oppose Iran’s perceived attempts to spread its influence across the Middle East.

Riyadh welcomed the decision by the UAE and Bahrain to establish full diplomatic ties with Israel, dubbed the Abraham Accords, but so far has been reluctant to follow suit, despite encouragement from the Trump administration, which along with Israel sees Saudi Arabia as the jewel in the crown in the normalisation process.

US assistant secretary of state for political-military affairs R Clarke Cooper, currently visiting Israel, says Saudi Arabia is constantly weighing whether to normalise relations with Israel, arguing that the kingdom’s plans to open itself up to the world would require it to join the Abraham Accords.

Saudi officials have traditionally maintained that ties with Israel can only follow the establishment of a Palestinian state, but that position appears to be softening with Riyadh’s blessing for its neighbours’ moves to engage publicly with Israel.

Mr Netanyahu refused to confirm the meeting even though one of his ministers described the summit as “an amazing achievement”.

“I have not commented on such matters for years and I am not going to start now,” Mr Netanyahu said. “For years I haven’t spared any effort to strengthen Israel and broaden the circle of peace.”

With ongoing tension within Mr Netanyahu’s coalition, he chose to keep his foreign and defence ministers, both from the rival Blue and White party, in the dark over the meeting. However, this came as no surprise as neither man was informed by Mr Netanyahu over the earlier contacts with Abu Dhabi and Manama.

A Saudi government adviser confirmed the night-time meeting, which was initially denied by the Saudi foreign minister.

A senior Israeli official noted that while Riyadh had initially agreed to have the fact that the meeting took place leaked to the media, the story broke in Israel sooner than planned.