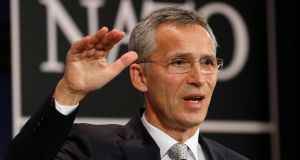 The Nato mission must remain in Afghanistan despite plans by the United States to pull soldiers out after 19 years of war, as withdrawal would risk the country becoming a “platform for international terrorists”, the chief of the military alliance has warned.

It comes after the US department of defence announced that it would withdraw 2,500 troops from Afghanistan and Iraq by mid-January, in a late bid by outgoing President Donald Trump to reduce the US involvements abroad he has frequently criticised.

The move alarmed some senior Republicans and US allies, who are concerned it could reduce US leverage over the Taliban during ongoing peace talks with the Afghan government that have yet to curb violence in the country.

“As you know, the United States has announced that it will reduce its presence in Afghanistan. But the Nato mission will remain. And we will continue to provide support to Afghan security forces,” Nato secretary general Jens Stoltenberg said on Monday.

“No ally wants to stay in Afghanistan for longer than is necessary. But we cannot risk Afghanistan becoming once more a platform for international terrorists to plan and organise attacks on our homelands. And we cannot let Isis [Islamic State] rebuild in Afghanistan the terror caliphate it lost in Syria and Iraq.”

Speaking at a session of the Nato parliamentary assembly, Mr Stoltenberg said Nato members would face a “difficult choice” as they consider the alliance’s future presence in Afghanistan at a meeting of defence ministers in February.

“Either stay, and pay the price of a continued military engagement. Or leave, and risk that the gains we have made are lost. And that the peace process falters,” the Norwegian politician said.

“We went into Afghanistan together. And when the time is right, we should leave together, in a co-ordinated way.”

The decision to withdraw troops by the Pentagon came after Mr Trump abruptly fired US defence secretary Mark Esper and appointed Chris Miller in his place, who said his appointment would help “bring the wars in Afghanistan and Iraq to a successful and responsible conclusion”.

The move to reduce troops drew rare criticism from within the Republican party including by the majority leader in the Senate Mitch McConnell, who warned against “any earthshaking changes in regard to defence or foreign policy” in the next few months. Mr Trump is due to hand over the presidency to Democrat Joe Biden on January 20th.

The US had been scheduled to withdraw troops by May 2021 under an agreement struck with the Taliban earlier this year, subject to security guarantees such as that the group would not allow extremists such as al-Qaeda to use the country as a base to plan attacks.

But a hoped-for ceasefire has not materialised, with the insurgent group ramping up attacks on provincial capitals and triggering US air strikes, as peace talks with the Afghan government in the Qatari capital Doha became mired in delays.

There are also concerns that the Taliban has not severed ties with al-Qaeda. Earlier this month, Afghanistan’s intelligence agency accused the Taliban of harbouring a senior al-Qaeda member in the country’s southwest.