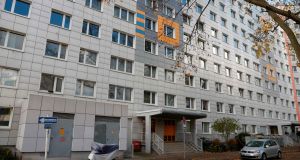 A residential building in Berlin’s Lichtenberg district, where the presumed victim of cannibalism was reported to have lived. Photograph: Odd Andersen/AFP via Getty Images

Berlin police have remanded in custody a 41-year-old maths teacher suspected of eating another man he met in an online chat forum.

The case gathered pace on November 8th when passersby discovered a human leg bone, stripped of tissue, in a city park. DNA testing revealed it to belong to the 44-year-old missing Stefan T.

Two teams, starting at two different points in the city, were both lead by sniffer dogs to the same apartment of Stefan R, in a high-rise building in the eastern district of Lichtenberg.

When they raided the apartment on Wednesday they discovered a chest freezer with traces of human blood and a bone saw. In his cellar room were 25kg of cleaning chemicals which the man insisted were to “manufacture soap”.

After studying online chat transcripts between the two men, in which they reportedly agreed to meet, police believe it is likely Stefan R ate parts of the older’s man’s body – and dissolved the rest in the bath.

“On the basis of the bone found, with its tissue completely missing, as well as other indicators, we have the strong suspicion that Stefan T was a victim of cannibalism,” said a police spokesman.

Martin Steltner, spokesman for Berlin’s state prosecutor, described the events as a “missing person case that has taken a tragic turn”.

The two men met on an online platform popular with men and women and there were no indications that the dead man was a member of any Berlin fetish groups, said Mr Steltner .

He said investigators were working on the assumption that Stefan T was killed in Stefan R’s apartment, given the equipment and blood traces found by a forensic team.

Stefan R was brought before a judge on Thursday and remanded in custody on suspicion of sexualised murder. The state prosecutor said there were no clues pointing to other motives, such as revenge.

The case has echoes of the “Rotenburg Cannibal” case from 2001 when a Berlin telecommunications technician, Bernd Brandes, was dismembered, killed and partially eaten by Armin Meiwes.

After two trials, Meiwes was sentenced to life in prison. Now 56, he applied for parole in August.