Poland pulls out of Jerusalem summit over Holocaust remarks 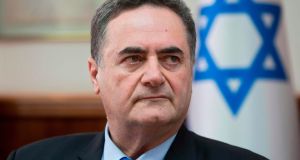 Poland has pulled out of a summit planned for Jerusalem on Tuesday, in an escalating diplomatic row over Israeli accusations of Polish complicity in the Holocaust.

The row, which appeared to have been defused at the weekend, was reignited when Yisrael Katz, who was appointed Israel’s foreign minister on Sunday, said “the Poles” had collaborated with the Nazis.

Responding on Monday, Polish prime minister Mateusz Morawiecki said that “in the absence of a firm Israeli response to the racist, unreasonable and unacceptable remarks” made by Mr Katz, Poland’s foreign minister would not travel to Israel to attend the Visegrad summit, which was being held outside of Europe for the first time.

Poland had already decided to send its foreign minister instead of prime minister to the event, to protest about comments made last week by Israeli prime minister Binyamin Netanyahu, who spoke in Warsaw about Polish collaboration in the killing of Jews. It took a clarification from Mr Netanyahu that he was referring to individual Poles, rather than the Polish nation, to prevent Poland boycotting the Jerusalem summit.

But comments by Mr Katz, the new foreign minister, who is the son of Holocaust survivors, rekindled the crisis.

“The memory of the Holocaust is something that we won’t forget and won’t concede. In diplomacy, you don’t want the other side to be insulted, but we aren’t going to change history. The Poles collaborated with the Nazis. Poland is the largest cemetery of the Jewish people. As former prime minister Yitzhak Shamir said, ‘They suckled anti-Semitism with their mother’s milk.’”

The Visegrad Group is an alliance of Poland, the Czech Republic, Slovakia and Hungary. All four states are considered pro-Israel, and Tuesday’s Jerusalem summit was to have been a major diplomatic coup for Mr Netanyahu, who has cultivated ties with the group in order to seek a counterweight to what he views as anti-Israel sentiment elsewhere in the EU.

The Jerusalem summit was cancelled in light of Poland’s boycott, although the other three Visegrad leaders were still expected to travel to Israel to meet with Mr Netanyahu.

Naftali Bennett, head of the New Right party, said it was impossible to build a shared future by erasing history

The latest events have derailed bilateral ties, which were gradually improving after tensions last year when Poland passed a law making it a crime to blame Poland for complicity in Nazi war crimes. Associates of Mr Morawiecki said on Monday that Warsaw was considering recalling Poland’s ambassador to Israel and possibly even cutting off diplomatic ties.

Nazi Germany murdered six million Jews, mostly in Poland, where most of its extermination camps were located. About three million non-Jewish Poles were also killed in the war.

Naftali Bennett, head of the New Right party, said it was impossible to build a shared future by erasing history. “The Polish people were victims in the Holocaust, but there were quite a few Poles who murdered Jews and played an active role in anti-Semitism.”

Yair Lapid, chair of the centrist Yesh Atid party, spoke out in support of Mr Katz. “We needed to have a one-day-old foreign minister to have the truth told,” he said. “For four years the prime minister hasn’t bothered to say in his own voice that the reason that the Poles helped the Nazis was that anti-Semitism was a built-in part of Polish society. That isn’t racism, but the painful historic truth.”