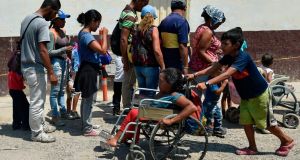 When Maria Duran had her first child in Venezuela in 2013 she encountered no problems. But by the time she gave birth to her second, 18 months ago, “everything had totally changed and for the worse. Far worse!”

At least her local hospital in the city of Ureña still had doctors and nurses working in it. “But they don’t have the conditions to do their job. Now the hospitals in Venezuela have nothing. Nothing! You have to bring everything with you when you go in – medicines, food, everything. Even in private clinics which are very expensive you have to do this now”

She tells her story standing in line outside a temporary medical post at one of the two bridges that links Ureña to the Colombian city of Cúcuta where she is waiting to have Marianna, now a smiley 1½-year-old, inoculated. “I didn’t even bother wasting my time trying in Ureña,” she says.

Further along the frontier at a Colombian Red Cross post serving the nearby Símon Bolívar Bridge a slightly disorientated Gabriel Martinez waits in line to see a doctor about his worsening heart problem. “If I take my pills I am okay,” the 60-year-old explains. “But now the public health post in my town no longer has medicines and to buy my medication in a pharmacy when they have it is impossible. One pill alone costs more than I make in a month. So I had to come here.”

If the main motive driving the daily mass exodus from Venezuela over the two international bridges into Cúcuta is the hunt for the food that shortages and hyperinflation make impossible to buy at home, then the second is the search for medical attention.

Interviews with Venezuelans from different regions as they crossed into Colombia paint a picture of a public health system in collapse, suffering a breakdown in hygiene control as staff, driven by the need to feed their own families increasingly drift away. Those who still show up for work battle crippling shortages of medicines, power blackouts and intermittent water shortages.

“The evaluation we make based on those coming over in the last three years is that Venezuela is a country whose health system is now very fragmented. It is no longer organised. The state has abandoned collective health. It does not even vaccinate its babies anymore. And all this is reflected in the critical individual cases we see arriving here,” says Dr Leonardo Duran, head of public health at Cúcuta’s health department.

This assessment represents a dramatic reversal from 15 years ago when the populist Bolivarian revolution of Hugo Chávez launched one of its banner initiatives, Barrio Adentro. The supposedly socialist revolution’s first misión – or social programme – it was staffed by thousands of medical professionals from Chávez’s ally Cuba and was initially widely popular, even garnering praise from bodies such as the World Health Organisation for improving public health by bringing primary care to previously neglected poor neighbourhoods.

The programme eventually consumed tens of billions of dollars of Venezuela’s oil wealth but nevertheless has all but collapsed amid gross mismanagement and a lack of funds once oil could no longer bankroll the Chavista regime’s reckless spending and corruption.

As a result, infant and maternal mortality rates are surging, in part fuelled by an explosion in teenage pregnancies due to the collapse of reproductive healthcare provision. The infant mortality rate is now higher than when Chávez came to power in 1999 and, with the collapse of immunisation programmes, previously eradicated infectious diseases are re-emerging, threatening a regional health calamity.

Foreign analysts estimate that up to 20,000 Cuban medical personnel are still in Venezuela, for which Havana receives about 50,000 barrels of oil a day in payment. But in the medical centres set up to receive Venezuelans in Cúcuta, no one admits to having seen a Cuban doctor or nurse in years.

“The misión in our town ceased working over three years ago and the Cubans left. They are almost all gone,” says Ana Alarcón as she waits with her seven-month-old grandson to see a nurse. Many of the Cubans have taken advantage of the crisis and, instead of returning to their communist island, have moved instead to Colombia and beyond where they have found work in healthcare.

“The misiones started to falter as far back in 2006,” says Venezuelan nurse Graciela Sarmiento as she waits at the Red Cross post. “At first the Cubans did make a difference, especially in poor neighbourhoods. But it all went wrong quickly and today the collapse is total. There isn’t a health system in Venezuela any more. People are dying there because of the lack of medicines. I witnessed this. These were my patients.”

She says she did not want to leave but last month made the 15-hour bus journey to the Colombian border. “One of my children is glycemic so we had to,” she explains. “There is nothing there anymore. No food, no medicines, no teachers in the schools. I was no longer able to feed my three kids.”

For Colombia’s authorities, the operation at the border to provide help to Venezuelans seeking medical assistance is not just humanitarian but also an effort to prevent the infectious diseases that have reappeared in Venezuela spreading across the border. Its neighbour’s crisis has already led to a spike in cases of measles and the re-emergence of diphtheria after over a decade’s absence.

This week, the Norte de Santander district, of which Cúcuta is the capital, declared a public health calamity along its frontier with Venezuela to trigger the release of extra resources.

But Colombian officials, their system already strained by the estimated one million Venezuelans that have already entered the country, fear they will be joined by many more if a solution is not quickly found to the political standoff between Chavismo’s increasingly isolated strongman Nicolás Maduro, who retains the backing of security forces, and the country’s opposition, which is demanding he step down.

“We are preoccupied that Maduro could generate an aggressive reaction by the people and this could also cause a massive migration of Venezuelans into this country. And we do not have the institutional or logistical capacity to respond to such an event,” warns Dr Duran.