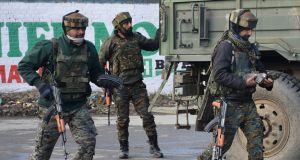 Four Indian soldiers, three militants and one policeman were killed in a gun battle in India’s northern Kashmir state on Monday, four days after more than 40 paramilitary policemen died in a suicide bombing in the war-torn state.

Officials said the fire fight in Pulwama district, 30km south of the state’s summer capital Srinagar, lasted more than 19 hours. One civilian was also killed when fighting erupted following a warning by an informant that militants were holed up in a house in Pinglan village.

As Indian army troops and a special operations group from the police began cordoning off the area, they came under sustained gunfire from militants. An Indian army major was among the fatalities.

According to reports from Kashmir, at least seven army and police personnel were injured in the exchange of fire.

The security forces said the two militants killed in the attack were involved in last Thursday’s bombing of the Central Reserve Police Force convoy in nearby Awantipora.

A 19-year-old Kashmiri student from Srinagar drove a car packed with some 60kg of explosives into one of the convoy buses in what was one of the deadliest attacks on the security forces in Kashmir in 30 years.

Senior officials said the two militants were Pakistani nationals and members of the Pakistan-based Jaish-e-Mohammad (JeM) Islamist group that has claimed responsibility for the convoy attack.

Speaking at a public function in Delhi on Friday morning after chairing a meeting of the cabinet committee on security, which included India’s three military chiefs, the PM said that the “forces behind the attack and the people who are responsible for it, will definitely be punished for their crimes”.

He accused Pakistan of committing a “huge mistake” by planning and executing the bombings and said it would pay a “huge price” for it. India’s security forces, he added, had been given “full freedom” to respond to the attack.

India has withdrawn long-standing trade privileges for Pakistan and imposed a 200 per cent import tariff on all Pakistani goods.

It has also recalled its high commissioner in Islamabad for “consultations”. Pakistan reciprocated on Monday by summoning its envoy from Delhi.

Meanwhile, Indian authorities have warned against rising communal tension across the country, as scores of Kashmiris living outside their state were dismissed from employment, evicted from their rented homes and even beaten up by locals who blamed them for last week’s attack.

Kashmiris in northern Punjab, Haryana and Uttarakhand states said they were being hounded, trolled on social media and subjected to violent abuse.

Television news reports said many Kashmiris had become refugees in the country and were being provided lodging by charitable institutions.

India claims that Pakistan, which seized a third of Kashmir after independence in 1947 and lays claim to the rest, fuels the disputed province’s 30-year-old Muslim insurgency for an independent homeland in which more than 70,000 people have died.

Pakistan denies these allegations, saying it only provides Kashmiri separatists moral and diplomatic support for their cause. The two neighbours have fought two of their three wars since independence over Kashmir.