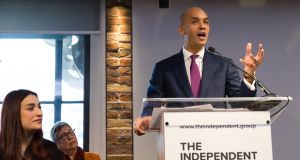 As they faced the press in a small, overcrowded room across the river from Westminster, the seven MPs leaving Labour discouraged any comparison with the formation of the Social Democratic Party (SDP) in 1981. The conventional wisdom that third parties cannot succeed under Britain’s electoral system often points to the SDP, which failed to break the mould of British politics and disappeared into a bad-tempered merger with the Liberals.

If the SDP failed to win many seats, it helped to keep Labour out of power in 1983 and to persuade Neil Kinnock to change his party’s direction, paving the way for Tony Blair’s centrism. Thirty years later Ukip was unable to turn its popular support into seats at Westminster but put so much pressure on the Conservatives that David Cameron called a referendum on the UK’s EU membership.

The seven MPs, who will sit at Westminster as the Independent Group, have none of the public profile or political gravitas of the SDP’s “gang of four”, three of whom were among the best-known politicians in the country. But the new group is likely to grow, particularly if other Labour MPs critical of Jeremy Corbyn’s leadership face the threat of deselection by their local parties.

The seven MPs have been unhappy in Labour for different reasons but all are opposed to Brexit and support a second referendum. They have ruled out a merger with the Liberal Democrats but hope to attract disaffected Conservatives such as Nick Boles, who faces a threat of deselection because of his support for a soft Brexit.

The group is not yet a political party and has not agreed detailed policies but its statement of independence identifies the most important differences with the Labour leadership.

“Labour now pursues policies that would weaken our national security; accepts the narratives of states hostile to our country; has failed to take a lead in addressing the challenge of Brexit and to provide a strong and coherent alternative to the Conservatives’ approach; is passive in circumstances of international humanitarian distress; is hostile to businesses large and small; and threatens to destabilise the British economy in pursuit of ideological objectives,” they say.

The seven defectors have a record of supporting armed intervention in Iraq or Syria, favour more business-friendly economic policies and are unhappy with Labour’s redistributive proposals. Polling suggests that Corbyn’s policies are much more popular than those of his departing critics. Their action on Monday may, however, have made it less likely that the Labour leader will get a chance to put those policies into action.