When it comes to 2020, don’t count out the moderate Democrats

US Politics: Candidates pile into the race as itch to defeat Trump takes hold 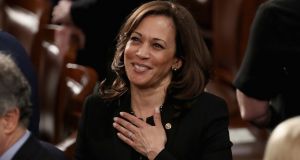 Kamala Harris – already living down her past as a prosecuting attorney. Photograph: Win McNamee/Getty

At some point, any able-bodied Democrat who does not run for US president will have searching questions to answer about their self-esteem.

Declared and probable candidates for 2020 are well into the double figures. Senator Kamala Harris has even reached the excruciatingly titled memoir-manifesto stage, with The Truths We Hold and, for lucky children, Superheroes are Everywhere.

Surveying this diverse, jostling field, many commentators say the party’s future is left wing. Radicalised in opposition to president Donald Trump, activists are demanding universal healthcare; the abolition of current immigration enforcement and; through a Green New Deal, the rapid decarbonisation of the US economy.

The centre is clean out of morale and, after Hillary Clinton’s defeat in 2016, electoral credibility, too. When Trump decried “socialism” in his State of the Union address, he was inadvertently flattering the left’s current momentum.

The emergence of the most progressive Democratic ticket since the 1980s is plausible enough. But it is not written. On Sunday, Minnesota’s pragmatic senator Amy Klobuchar declared her candidacy. Also weighing a bid is Ohio’s Sherrod Brown, another midwestern senator who performs well in red districts. Neither is the favourite, nor even much recognised outside their region, but they, or someone of their moderate ilk, could still win.

Trump has made some Democrats ravenous for an equal and opposite reaction to him. But he has made many more just itch to defeat him, whatever the means. A Monmouth University survey has found that 56 per cent of registered Democrats and Democratic-leaning independents favour an electable candidate over an ideologically sympathetic one. Just 33 per cent prefer the inverse. The gap is even larger among women. Polling director Patrick Murray says this preference is untypical in primary races within either party.

If this win-at-all-costs discipline seems easy to promise and harder to practise, remember that it has already been tested. In the 2018 midterm elections, Democrats could have promised Trump’s impeachment or a battery of green taxes or kinder treatment of immigrants. Instead, they hardly strayed from a narrow, exhaustively poll-tested message about healthcare. The result was a handsome victory.

The left’s vehement reaction to Howard Schultz’s independent designs on the White House is almost as telling. Some of it is ideological resentment of a business-minded centrist. The rest is pure terror at a possible split in the anti-Trump vote. “Progressive” is an imperfect description of the Democratic spirit right now. “Ruthless” is more like it.

What if the party really were as radical as the hype around a few of its congressional newcomers suggests? A moderate would still have grounds for hope.

A candidate who runs as a progressive faces a gauntlet of purity tests. It is the nature of purity that no actual human possesses it. Candidates end up debasing themselves in a futile quest to establish their political pristineness. Harris is already living down her past as a prosecuting attorney, which some liberals cite as proof of latent authoritarianism. Another senator, Elizabeth Warren, has apologised for once registering as “American Indian”, lest anyone think a white-looking woman was claiming victimhood. A third, Kirsten Gillibrand, is accused of coming to the left conveniently late.

Even to recite these stories is to feel sorry for the candidates. But it was their choice to pitch to the left, whose tendency to eat its own has never been a tightly guarded secret.

A moderate can hope to evade these tests altogether. By never claiming to be all that radical in the first place, any pragmatic compromises on their record are unworthy of censure, or even comment. Klobuchar is some way to the left of a 1990s New Democrat. But it is well known that she gets on with Republicans and only goes so far on universal healthcare.

Such accommodations with reality are the point of her candidacy, not a stain to be explained away. Activists may still balk, but they cannot put her through the kind of ideological invigilation that leaves the subject looking shifty, hypocritical and pandering. Dissenting from the base confers a perverse kind of staying power.

The Democrats’ leftward turn is a story that has outstripped the available evidence. Some of it is wishful Republican thinking. Some of it is the media’s enchantment with novelty. But just three months ago, the Democrats won suburban votes by the bushel with a risk-averse, even drab campaign. The lesson is not entirely lost on the party. – Copyright The Financial Times Limited 2019