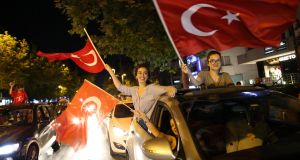 In his victory speech, Mr Imamoglu hailed his win as marking “a new page in Istanbul”.

“On this new page, there will be justice, equality, love. We will stop the arrogance and waste. Today 16 million Istanbullus have refreshed our belief in democracy. I thank them all from my heart. You have shown the world that Turkey still protects its democracy. And we have shown other countries who try to go down the road we were choosing that it is no road at all,” he said.

Sunday’s rerun, in which at least 10 million people were eligible to vote, was seen as a test for Turkey’s fragile democratic standards and Mr Erdogan’s political future.

The swift concession by Mr Yildirim, an Erdogan ally, spared the AKP the embarrassment of watching live results trickle in on Sunday night. However, it will now lead to intensified power struggles between factions inside the ruling coalition.

Turkey’s opposition, meanwhile, was jubilant at the initial results. Cars honked incessantly in liberal neighbourhoods and strangers shook hands and congratulated each other on the win. Mr Imamoglu’s voice echoed from public television screens and from inside cafes.

“I think he has quite a difficult job ahead of him and I’m not expecting big changes,” said Mehmet Kizilay (36), who voted for Imamoglu. “But it’s a very promising and hopeful start. We are very happy he won.”

Mr Imamoglu first stunned the country with a narrow win in the mayoral vote held on March 31st, a rare defeat for and personal blow to Mr Erdogan in his beloved hometown.

However, after weeks of AKP appeals, Turkey’s electoral board upheld one of the ruling party’s complaints regarding ballot counting and annulled Mr Imamoglu’s victory – a decision that sparked international outrage.

“I’m not happy I’ve had to come vote again,” Aysun Coc (53) said after casting her vote on Sunday morning. “Imamoglu will win again with an even bigger margin this time. So what, they will make us do another vote next month?

“The government will have to accept the result this time. If they don’t, we are ready to protest in a big way.”

Mr Yildirim worked hard to close the gap of 13,000 votes in the first ballot, reaching out to his party’s base in working-class and conservative neighbourhoods who had punished the government for Turkey’s economic crisis by staying away from the voting booth in March.

However, in a televised debate with Mr Imamoglu and in conversations with voters Mr Yildirim struggled to explain why a repeat election was necessary. Two days before the vote, most reliable polls showed that Mr Imamoglu’s lead over his rival had widened to as much as 9 per cent. Unofficial counts showed that with nearly all ballot boxes counted, Mr Imamoglu had a lead of more than 715,000 votes.

Mr Imamoglu, a previously anonymous local administrator, was embraced by voters across the city in March for a platform that focused on bringing people together across the city’s highly polarised religious, class and ethnic divides.

He painted his new campaign as a battle for the future of Turkish democracy itself.

“Today our people will make the best decision – for the sake of our democracy, for Istanbul and also for the legitimacy of all future elections,” he told reporters after voting on Sunday morning.

Mr Erdogan returned to his hometown from the capital Ankara to cast his vote. “I believe the thinking voter will make the best decision for Istanbul,” he told hundreds of supporters who greeted him near his residence in Uskudar, on the Asian side of the Bosphorus.

Losing Istanbul for a second time had been an unthinkable outcome for the AKP. As Turkey’s biggest city and economic hub, Istanbul accounted for 31 per cent of Turkey’s GDP in 2017, and the city is an important driver of the government’s unofficial patronage networks. It has been controlled by the ruling party and its Islamist predecessors for the last quarter of a century.

“If Imamoglu wins again, there’s going to be a chain of serious changes in Turkish politics,” journalist and writer Murat Yetkin told Reuters earlier on Sunday.

“It will be interpreted as the beginning of a decline for AKP and for Erdogan as well,” he added, noting that the president himself had called the local elections “a matter of survival”.

Soner Cagaptay, a Turkish-American political scientist, said: “Imamoglu’s lead today shows that Turkey’s democratic structures are incredibly resilient. Turkey has been ruled by a populist leader for almost two decades: he has tried to erode the rule of law and take over the media.

Rumours are already circulating in political circles that the second defeat could trigger a snap national election as Mr Erdogan seeks to oust increasingly fractious elements in his current government coalition.

Former president Abdullah Gül, who has been openly critical of the decision to rerun Istanbul’s mayoral election, caused a stir on Sunday by telling reporters: “God willing everything will be fine.” The phrase’s similarity to Mr Imamoglu’s slogan – “Everything will be fine” – led to speculation the former Erdogan ally had cast his ballot for Imamoglu.

Across the city on Sunday, both AKP and CHP voters were united in their desire to avoid further political turmoil after polls closed at 5pm.

“Clearly there is some funny business going on here but I don’t know what,” said 65-year-old AKP voter Cihat Icyumaz, who, like many Istanbullus, cut short his summer holiday to come home and vote.

“For me, chaos after this round of elections is the scariest outcome. I just want the candidate who is best for Istanbul to win.” – Guardian