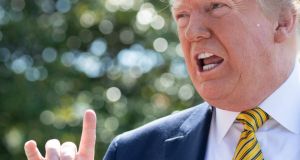 US president Donald Trump speaks to the media about Iran, prior to departing for Camp David. Photograph: Saul Loeb/AFP/Getty Images

US president Donald Trump has defended his decision to cancel a planned air strike on Iran on Thursday night, claiming that he could help “make Iran great again” if Tehran cooperates.

Speaking as he left the White House on Saturday morning for Camp David – the presidential country retreat in Maryland – Mr Trump repeated his view that a military strike would have been disproportionate to the shooting-down of an unmanned US drone in the Persian Gulf region this week.

He warned that additional sanctions would be placed on Iran, a country that is already suffering economically under the weight of punishing sanctions.

Mr Trump suggested that he could be open to negotiations with Iran. “We’ll start all over. We could have a deal with them very quickly. It’s up to them,” he said. He dismissed the 2015 nuclear deal struck by president Barack Obama and other international powers, arguing that it would have allowed Iran to legally build a weapon in a number of years and did not allow full inspection rights.

He said that, as a New Yorker, he knows a lot of Iranians, describing them as “very smart, very ambitious”.

“I come from New York City. We have a lot of Iranians and they’re great people,” he said. “I have many friends who are Iranians. I don’t want to kill 150 Iranians,” he added, referring to his decision not to sanction military strikes on Iran after he was advised that 150 people might be killed.

The president also dismissed suggestions that the ongoing standoff between Washington and Tehran was about oil and keeping access to the Straits of Hormuz, a key thoroughfare for oil tankers.

“We are the number-one oil producer – oil and gas – in the world by far,” he said. “We don’t really need the straits anymore. The biggest beneficiary of the straits is China. Ninety-one per cent of their energy comes out of the straits,” he said, adding that Japan and Indonesia also benefit. “We are doing them a very big service .”

Mr Trump said that Iran would be discussed over the next two days in Camp David, with a series of phonecalls scheduled with key players. He also said he had confidence in US national security advisor John Bolton, who has taken an interventionist approach to Iran, noting that he takes advice from a range of people within his administration. “John Bolton is doing a very good job but he takes generally a tough posture,” he said, adding: “ultimately I make the decision.”

Tensions between the US and Iran have been building in recent months, culminating in the shooting-down of an unmanned US drone this week. That development prompted the US to consider striking Iranian targets as a reprisal.

But Mr Trump ultimately decided to abort the mission, after preparations were well underway.

The federal aviation authority issued a warning prohibiting US-registered aircraft flying over areas of Iran in anticipation of the strikes on Thursday night. Several US and international carriers including Qantas, British Airways and Malaysian Airlines also announced they were rerouting their flights to avoid the area.

Speculation had mounted throughout Thursday that the US could be considering military action against Iran following the shooting-down of the RQ-4A Global Hawk by the Islamic Revolutionary Guards Corp (IRGC). The $140 million drone, the size of an aircraft, is one of the most sophisticated in the US military’s arsenal. It was operating at a high altitude, about 34km off the Iranian coast, before it was hit and fell into international waters, US Central Command said. The Pentagon dismissed accusations from Tehran that is was operating in Iranian air space.

“This was an unprovoked attack that had not violated Iranian air space at any time,” lieutenant general Joseph Guastella said.

But the incident marked a significant escalation in tensions between the two powers which has been building since the US pulled out of the Iran nuclear deal in May 2018.

The White House blamed Iran for an attack on two oil ships last week in the region, releasing video footage of what it claimed was an Iranian Revolutionary Guards boat pulling up beside the stricken oil tanker and removing a mine.

In response, Iran said on Monday that it would increase its stockpile of uranium in breach of the 2015 Iran nuclear deal and hinted that it could increase enrichment levels to 20 per cent, a move that would bring it closer to having the capability to create a nuclear bomb.