Officers called to candidate’s house after reports of domestic incident 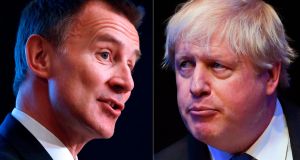 Boris Johnson has addressed questions regarding police being called to the home he shares with his girlfriend, in the early hours of Friday morning.

Neighbours alerted the police after hearing a loud altercation involving screaming, shouting and banging, according to the Guardian.

Mr Johnson said voters were entitled to ask about his character, but on the matter of the police being called to his home, said “people don’t want to hear about that kind of thing”.

He said Britain wants somebody who can get the job done.

When asked if he would refuse to comment on the events of Friday, he replied that was “pretty obvious”.

Mr Johnson was speaking at the Tory leadership hustings, where he will go head to head with his challenger for the Conservative crown, Jeremy Hunt

About 160,000 Conservative Party members will get a vote in the final round of the Conservative leadership contest.

As they make their choices, Boris Johnson and Jeremy Hunt will audition in front of the party’s grassroots by taking part in 16 hustings in every region of the UK, starting with Birmingham on Saturday.

Ahead of the hustings, Mr Hunt attacked his rival over reports he was avoiding a live TV debate before postal ballots are returned.

Invoking Mr Johnson’s personal hero, Winston Churchill, in his criticism, the UK’s foreign secretary told the Daily Telegraph: “This is supposed to be his finest hour ... but if you’re going to hide away, that’s not democracy.

“And you can’t have that debate if one of the candidates is bottling all opportunities to have a public head-to-head debate before ballot papers are sent out.”

Mr Hunt said that “scrutiny can be uncomfortable”, but “if we can’t handle it with friends, we won’t deserve to lead against our opponents”.

Police officers were alerted early on Friday to an altercation at the home Mr Johnson shares with his girlfriend Carrie Symonds after neighbours said there had been screaming, shouting and banging, according to the Guardian.

At one point Ms Symonds was heard telling Mr Johnson to “get off me” and “get out of my flat”, the Guardian reported.

The newspaper said it had heard a recording of the incident in which Mr Johnson could allegedly be heard saying “get off my f****** laptop” before a loud crashing noise.

The Guardian said Ms Symonds could also be heard saying Mr Johnson had damaged a sofa with red wine.

“You just don’t care for anything because you’re spoilt. You have no care for money or anything,” Ms Symonds is reported to have said.

Scotland Yard said they were alerted to the situation by a caller who “was concerned for the welfare of a female neighbour”.

A neighbour, a 32-year-old nursery worker who would only give her name as Fatimah, said: “Just after midnight I heard a lady shouting, but I couldn’t make out what she said, then I heard plates and glasses smashing and things being thrown around.

“I was watching something on the television and I had to mute it because I was quite concerned, it was coming through the walls.”

Another neighbour, who did not want to be identified, told the Telegraph: “I heard the row, it was pretty loud. I was quite worried to be honest, it was bad.

“I heard a lot of smashing — it sounded like plates or glasses — and I could hear her shouting. It was definitely her; I didn’t hear him. There was a lot of shouting and swearing. It didn’t last that long, maybe five minutes.”

Tory grassroots will gather on Saturday as reports of the row feature across the front pages.

Mr Grieve told BBC Radio 4’s Today programme: “I think the issue of any candidate’s character, standing for the leadership of a party, and aiming to be a prime minister is going to be relevant.

“And has to be relevant because they are going to be in a position of responsibility where they have to make very important decisions.

“I think one has got to be a bit careful about what aspects of character really matter.

“But, clearly, things like reliability and honesty are very important things.

“So, people are going to have to weigh that up in respect of either of these two candidates.”

Mr Johnson’s team have declined to comment on the reports, while his supporters remained largely quiet.– PA, Reuters