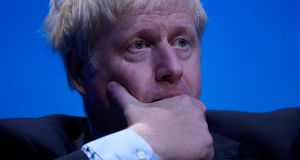 Boris Johnson repeatedly refused to answer questions about police being called to his flat as he took part in the first hustings of the run-off to be the next prime minister.

Pressed on the incident as he faced an audience of Tory members in Birmingham, Mr Johnson said: “I don’t think they want to hear about that kind of thing.”

The Tory-organised event came a day after it emerged that police officers were called to the London home Mr Johnson shares with partner Carrie Symonds after neighbours said there had been a loud altercation involving screaming, shouting and banging.

When asked by hustings moderator Iain Dale whether a person’s private life has any bearing on someone’s ability to discharge the office of prime minister, the crowd booed and Mr Johnson said: “Don’t boo the great man.”

“I think what people want to know is whether I have the determination and the courage to deliver on the commitments that I’m making, and it will need a lot of grit right now.

“People are entitled to ask about me and my determination, my character and what I want to do for the country.”

Mr Johnson was taking part in the leadership event with UK foreign secretary Jeremy Hunt as the two men battle to win the support of 160,000 Tory party members who will choose the next prime minister.

Earlier, in his speech, Mr Johnson promised to “get Brexit done”, telling the audience he is the man to “unleash on the project.”

He told Tory members: “The hour is darkest before dawn.

“And I am here to tell you that in all confidence, we can turn this thing around. “And the thing we need to do – you know what it is – we need to get Brexit done.”

That message was echoed by his rival Mr Hunt, who said in his speech: “Friends, we are in a very serious situation.

“Get things right and we can deliver Brexit, unite the party and send [Labour leader] Corbyn packing. And that’s our choice.”

During his question-and-answer session, Mr Johnson also dodged a question from Mr Dale about whether he would have former leadership rival Michael Gove in his Cabinet, saying: “There are plenty of candidates here in this room and it would be invidious of me to speculate about that.”

The former foreign secretary was also put on the spot by a member of the audience, who referred to a reception in June 2018 when Mr Johnson is said to have replied “f*** business” when asked about corporate concerns regarding a hard Brexit.

Asked if his attitude towards British jobs is still as “careless” as it was then, Mr Johnson replied: “I bitterly resent the way one stray remark to the Belgian ambassador who was making the case that the UK would not be able to leave the European Union, I don’t think that should be allowed to cloud what is, I think, a pretty extraordinary record as a politician for sticking up for business at every conceivable opportunity.”

On the £39 billion Brexit financial settlement to the European Union, Mr Johnson said: “I think it is important that as the UK’s negotiator we should retain some creative ambiguity about the money until such time as we get a resolution.”

Mr Johnson said it is not in the interests “of our friends and partners, I believe, unilaterally to impose tariffs if we decide not to”.

He added: “If the EU decided unilaterally to impose tariffs on goods for the United Kingdom, it would probably be the first time since the Napoleonic continental system that there had been such a pointless interruption of trade between us. And I don’t think that they would want to go down that route.”

He added: “If we send the wrong person there’s going to be no negotiation, no trust, no deal, and if parliament stops that, maybe no Brexit.